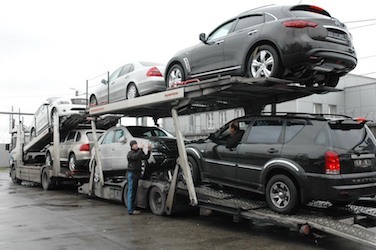 Russian vehicle exports are behind government expectations, despite being up 3% on last year’s figures. The country exported 34,200 finished vehicles between January and May this year, according to the country’s Federal Custom Service, but due to the logistics subsidies and other state support measures that have been made, the amount was predicted to be higher.

The Russian government subsidises export logistics for both Russian and foreign carmakers producing vehicles in the country. In 2018 it forecast subsidies would reach Rub11.8 billion ($180m). From 2018 to 2025 those export subsidies were estimated to be around Rub136 billion ($2.1 billion), according to projections published by the Industry and Trade Ministry in late 2017.

However, only a small number of carmakers have either reported an increase in exports from Russia or any plans to do so in 2018.

Avtovaz and VW ahead of the curveRussian vehicle maker Avtovaz exported 16,600 finished vehicles during the first half of 2018, up 64% compared to the same period last year. The main foreign sales markets for the company were Belarus and Kazakhstan, with 4,206 and 5,854 finished vehicles delivered respectively. The company said that on average, export within the region covered by the Commonwealth of Independent States (CIS) had almost doubled during the period.

Avtovaz has also reported the start of vehicle exports to a number of new countries, such as Tunisia and Cuba. However, it has said nothing about its finished vehicle exports to the European Union, despite the earlier statement that EU emission rules may force it to stop supplies in 2018.

Volkswagen, meanwhile, has decided to resume exporting Skodas from Russia to the EU. The company exported 15,600 Skoda Yetis to central and western Europe in 2017 because of a capacity shortage at the local production facilities. However, these supplies were halted earlier this year as part of an overall plug on exports announced last year.

In a recent statement, VW said that it planned to start exporting Skoda Octavia to the EU and supply around 10,000 finished vehicles in the second half of 2018.

The other major exporter, Hyundai-Kia, has yet to reveal its export figures. The company exported 5,900 finished vehicles in 2017, almost three times lower than the peak achieved in 2015. The decrease was due to difficulties in supplying finished vehicles to Kazakhstan.

In the meantime, Russian plants manufactured 771,000 finished vehicles during the first half of 2018, up by 18.9% as compared to the same period of 2017, according to the State Statistic Service. Commenting on those figures, Russia’s Industry and Trade Minister Denis Manturov said that they were in line with government expectations.

He added that the Ministry was not going to change its forecast for 2018, anticipating a 15% increase in vehicle production and a 10% increase in domestic sales. The forecast on vehicle exports also remains, despite the performance.