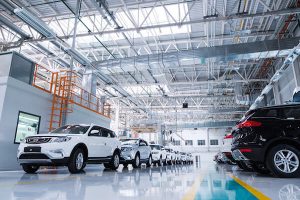 Russian state-owned rail monopoly Russian Railways (RZD) has launched a block train service from China to Belarus for carmaker Geely, to serve its BelGee plant in the city of Zhodino. The plant, which is a joint venture between Geely and the Belarus government, started making cars last year.

In a pilot delivery operation, four trains with containers of automotive kits departed from Chengdu in China for Zhodino, arriving on February 18. Subsidiary division RZD Logistics said it was planning to follow those deliveries with similar block trains of parts from other Geely suppliers in China.

Vyacheslav Valenik, general director of RZD Logistics, said the company moved a wide range of goods by train but would be focusing more attention over the next few years on using rail for finished vehicles and parts, as there was increasing interest in the mode from carmakers and dealers in Russia.

“Transporting automotive kits by railway [from China to Belarus] is three times faster, as compared to delivering them by sea, and this obviously gives us an opportunity to pull some flows from existing sea routes to rail,” Valenik said. “This year, we plan to not only fulfill the agreed delivery schedule but also to proactively work on expanding the geography of deliveries of Geely’s production from China.”