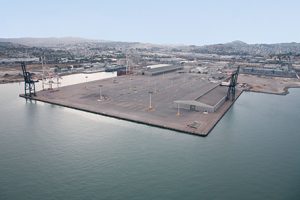 The agreement covers Pier 80, the port’s cargo terminal on the southern waterfront, which although currently under-utilised could now become a busy marine terminal for automotive.

San Francisco Port has been in talks with PAS for the past year about shifting the focus at Pier 80 to automotive imports and exports. PAS currently operates automotive marine terminals in San Diego and Grays Harbor, Washington and offers shipping services from the US west coast and Hawaii.

The latest agreement between the port and PAS will allow the import and export of vehicles by ship at Pier 80, with on-terminal vehicle preparation and detailing services. Vehicles arriving at the port will be transported by truck from Pier 80 to Northern California dealerships.

The port anticipates that Pier 80 will receive around 96 ships a year, carrying up to 150,000 vehicles in total, but that initial throughput will be around 115,000 units annually. PAS could also manage project cargo, breakbulk cargo or vessel lay berthing.

New vehicles are likely to be imported and exported to Asia and Europe, as well as Mexico. By 2020, it is expected that one in four vehicles driven in the US will be made in Mexico. Exports to North America currently account for around 91% of total exports from that country. While rail is still the primary mode of transport to North America, short-sea shipping is growing. Short sea has always been more common to the east coast, as ships moving westbound around the world to the US west coast are less frequent than ships moving eastbound from Asia, but shipping from Mexico to the US west coast is now becoming increasingly popular.

It is hoped the development of Pier 80 will also help to ease the congestion of other west coast ports, many of which are at near-full capacity. In March, four ro-ro ships carrying vehicles to PAS’s terminal at the port of San Diego were stuck off the shores of Coronado for nearly two weeks. Pasha said the ships could not dock due to a lack of unloading space: there were 22,000 vehicles being stored at the terminal at the time. The vessels were carrying more than 7,000 vehicles between them.

The latest agreement with San Francisco Port over Pier 80 will no doubt offer come as a relief to Pasha, as it continues to grow: it has previously indicated it needed more space and that the configuration of the terminal at San Diego port would not support continued growth in imports.

Pasha has significantly expanded its business over recent years and in 2015 moved a total of 425,253 vehicles.