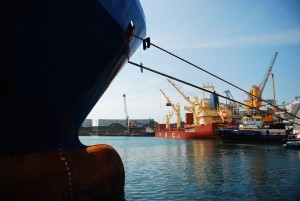 In the space of one hour and fifty minutes, the terminal disembarked 632 vehicles. According to the port, this is some 232% faster than the regional average, which is around 100 units per hour.

The new record was achieved on K-Line's ‘Bosporus Highway’, which had been inbound from Mexico with 632 Chevrolet cars. Fast Terminal managed to sustain an hourly discharge rate of 332 vehicles, which it says is both significantly better than the continental average of 160 units, and the overall record established in the Americas of 276 units.

According to Mauricio Suárez Ramírez, president of the Santa Marta Port Company Group, such levels of productivity are not isolated.

“Previously, we had efficiency levels of 272 vehicles per hour, which was already a record for the continent. Now, we have beaten our own record, achieving a discharge rate of 332 units per hour, which means that there will be more employment opportunities for our people,” he said.

José María Sola Freixa, president of Fast Terminal International noted, “Today we may say our intention is to increase and permanently maintain our efficiency in vehicle unloading and we are by far complying with the needs of our clients, making the port of Santa Marta, through Fast Terminal, an important point for global promotion.”

Not only was the whole unloading operation achieved without incident, but it also represented significant savings for K-Line, whose vessel spent less time docked. Freixa added that this will make the port of Santa Marta even more attractive in the future.