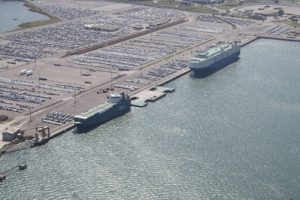 Santander (pictured) and Tarragona have topped the list as the best ports for handling finished vehicles in Spain, according to Anfac, the organisation that represents Spain’s automotive manufacturers.

In Anfac’s annual quality report on ports, the two both scored 4.3 out of a possible 5 marks.

Last year, Spanish ports handled 3.2m finished vehicles – up 12% on 2015. The eight ports included in the Anfac report handled 90% of this traffic. In total, 5.4m units were transported across all modes.

The average mark received in Anfac’s report was 4.2 out of 5. Those ports scoring 4 (‘satisfactory’) or more handled 83% of total port traffic in Spain.

[mpu_ad]The three ports at the bottom of the list were all marked down for their lack of rail connection. Despite this, Sagunto still scored 4. The other two, Vigo and Malaga, did not but their average result otherwise was 4.1.

Across the board, the report noted an increase in standards, however. “The general improvement in the ratings means that the quality of the services provided in the different ports is more and more homogeneous, as well as higher. This improvement is the result of the coordination effort between the port community of each port, led by the port authority, and vehicle manufacturers,” it noted.

Nevertheless, the report also identified areas in which improvements needed to be made – above all in an increase in the flexibility of services at competitive costs. It also called for training to be improved for those employees handling vehicles on the dock and for better connections between ports. 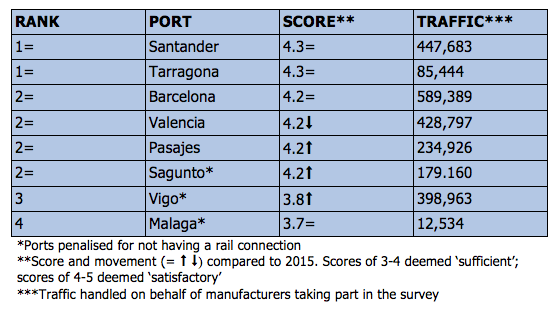