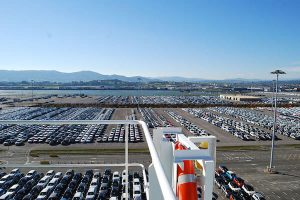 The port of Santander has opened a new Logistics Activities Zone (ZAL) that can accommodate up to 3,000 imported vehicles. The 52,258 sq.m facility is expected to handle around 30,000 units a year and is being used in conjunction with a further 27,100 sq.m area that was paved to hold finished vehicles in 2016.

Cantabrian Minister of Innovation, Industry, Tourism and Trade, Francisco Martín, said the port had been operating close to its capacity and that the new parking area would free up much-needed space for other activities there.

The paving of zones B and E of the ZAL has cost more than €1.7m ($1.9m) and includes new lighting supplied by five 30-metre high towers, equipped with ten projectors. A perimeter street lighting system has also been added, and a CCTV network is also in place.

The new area, which is now operational, has boosted automotive storage area at the port by 17%, allowing Santander to handle more vehicles and offer a better service to customers.

Port authority president, Jaime González, said it had helped the port make maximum use of existing resources and avoided the need for expensive land reclamation work in order to expand.