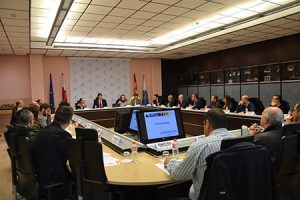 The northern Spanish port of Santander has revealed it wants to develop as a hub for automotive parts and components, offering a short-sea alternative to road for the movement of imported goods within Spain and outbound goods heading predominantly to the UK.

Port officials told the Regional Initiative Automotive Group (GIRA) earlier this month it wanted to take on both reception of automotive parts and their subsequent distribution from a specialist facility in the port. It intends to bring in a professional operator to manage this in a concession agreement, including investment in the appropriate facilities there.

According to the port authority, the move would allow Santander to generate new investment flows and retain investment from companies already active in the port. The move should boost the competitiveness of small and medium-sized suppliers within the port's hinterland, which includes Cantabria, the Basque Country, Asturias, Castilla y León, Comunidad de Madrid and some parts of Portugal, it suggested, as well as contributing to overall regional development in the north of Spain.

Customers would benefit from having access to an intermodal transport service that would be more environmentally friendly and more competitive than alternatives, it said.

In the short term, the operation would involve enhanced short-sea connections to the UK, which would allow GIRA production centres to dispatch parts and components to the country more easily, it said. A spokesperson for the port told Automotive Logistics it could develop short-sea routes from Santander to Portsmouth and Santander to Bristol, in particular. Portugal–UK connections could follow, however.

Ultimately, the plan will depend on the reaction of automotive manufacturers. “This would be an alternative to road and in some cases a more advantageous alternative to other logistics chains already using short-sea,” said the spokesperson. “The final decision on adoption will come from the automotive manufacturers, if they approve of the system we are trying to set up.”

The port authority and GIRA are currently undertaking preliminary studies, after which car assembly plants in the UK will be contacted to gauge their interest.

Initially, inbound parts would be held in warehouses close to the quay but longer-term, the plan is to set up a new hub operation for imports and exports in the port's Logistics Activity Zone (ZAL).

A decision on the scheme, which could be up and running within a year, is expected in the autumn.