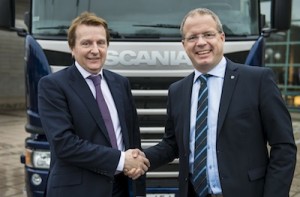 Swedish truck and bus maker Scania has received orders to supply 1,500 Euro 6-compliant trucks to the UK in the single biggest order to date for the country. Transport provider Eddie Stobart and A.W Jenkinson Forest Products have placed the orders, which will be filled over the next two years.

These most recent orders follow agreements signed in 2010, which were updated in 2012. Under these agreements Scania has delivered 2,000 trucks; it could not provide any further detail on the allocation of units per customer.

“It is with great pleasure that we announce this, the third major joint-procurement agreement with Eddie Stobart and A.W. Jenkinson Forest Products,” said Claes Jacobsson, managing director of Scania (Great Britain). “Since signing the first such order four years ago, our UK sales and service teams have worked tirelessly to ensure that we have continued to meet the expectations and demands of these two important operators. I am therefore delighted that Scania has once again been chosen as the preferred brand by both companies.”

According to the truckmaker the agreement will involve the supply of vehicles with a wide variety of specifications and designed for a wide range of transport applications, including G- and R-series trucks. The vehicles are being produced at Scania’s final assembly plant at Zwolle in the Netherlands. The company was unable to provide details on the management of the deliveries but said routes would vary depending on the ultimate destination of the trucks within the UK.

Aftermarket repair and maintenance will be handled by Scania’s service network in the UK.

The Euro 6 emission standard became compulsory for all new trucks in Europe on 31 December 2013. Scania launched its first Euro 6 trucks in 2011 and followed with its second generation of the vehicles in 2013.

“Our decision to continue taking Scania vehicles is based on their proven record within the Eddie Stobart and A.W. Jenkinson fleets,” said William Stobart, chief operating officer at Stobart Group. “We saw no reason but to continue this relationship as we enter into Euro 6 production, with the new deal giving us a lot of flexibility going forward."

Allan Wilson Jenkinson, the founder of the forestry company, owns a 4.9% stake in the Stobart Group.