Port terminal operator Southampton Cargo Handling (SCH) has signed a four-year deal with BMW for technical preparation of cars and motorcycles at Southampton and Sywell in the UK.

SCH currently carries out stevedoring and other port related operations in locations including Southampton, Liverpool, Portsmouth and Sheerness. 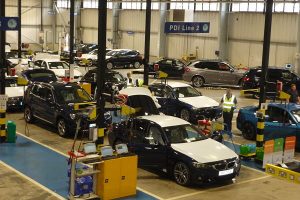 SCH carrying out PDI work on BMW vehicles in Southampton

SCH director Ian Morrison commented: “The award of this work enhances the current relationship we have with BMW and is an important new addition to the SCH portfolio.”

The company has recruited 10 additional staff for the operation at Sywell, near Northampton, which will involve work to prepare 10,000 BMW motorcycles imported annually for sale into the UK market.

Sywell is a new 22,860 sq.m centre dealing exclusively with BMW motorcycles. It replaces the process previously carried out for motorcycles at the BMW Thorne centre near Doncaster.

SCH has also taken over the operation of preparation centres at Oxford and Southampton that handle more than 50,000 BMW vehicles year, fitting accessories and modification ready for the vehicles to enter the UK market.

Nearly 50 employees, including specialist technicians, have been transferred to SCH from the previous unnamed contractor.

SCH already handles BMW Mini cars at Oxford, loading vehicles on trains for export ports Southampton and Purfleet, where the company is also responsible for discharging the cars from trains.

“Part of the new contract with BMW includes an increased responsibility for movement of Minis at the Oxford manufacturing plant,” said SCH in a statement.