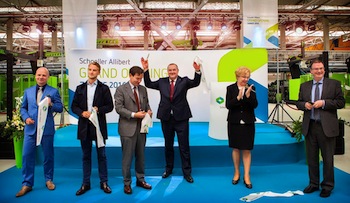 Schoeller Allibert, a supplier of reusable packaging, has opened a new production plant in Zabrze, Poland.

The facility, which opened last month, covers more than 28,000sq.m and is located in the Katowice Special Economic Zone in the city. Within the facility, there is a 6,350sq.m production plant, where Schoeller Allibert will produce a full portfolio of products for the central and eastern European region.

This will include the company’s new EuroClick, a versatile crate designed especially for the automotive industry.

Schoeller Allibert has been working on the new facility for the past eight months.

Ian Robinson, CEO of Schoeller Allibert Group said, “The establishment of this exciting new facility here in Poland is a major building block in our roadmap for a world-class manufacturing footprint for the Schoeller Allibert Group. With this new facility, we will be able to serve not only our customers in the growing Polish and central eastern European region, but also other parts of western Europe.”

The opening ceremony of the new plant was attended by those involved in the construction, and invited guests, including Malgorzata Manka-Szulik, the mayor of Zabrze, and the management board and colleagues of the Schoeller Allibert Group.

“We should be really proud that a company with more than 50 years of tradition, designing and manufacturing world-recognised high-quality plastic packaging, launches operations in our city,” said Manka-Szulik. “Representatives of almost all sectors of the economy use the products offered by the company. It is worth noting that sustainable growth of Schoeller Allibert is based on the implementation of innovative and environmental-friendly solutions.”

There has been a clear move in the automotive industry away from one-way disposable packaging, towards a greater reliance on returnable packaging over the last few years. This is even the case over distances that were once seen as prohibitive. Automotive companies dispose of hundreds of tonnes of disposable packaging every year, which is not only bad for the environment, but wastes significant amounts of money. As companies become more aware of sustainability, especially when it comes with costs savings, many are making the switch to reusable packaging.