Seat follows Dodge out of Russia 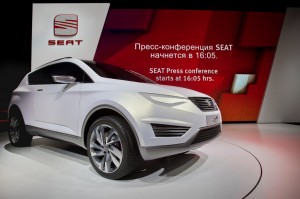 Seat has stopped its imports to Russia after the ongoing fall in vehicle sales. A spokesperson for the Spanish OEM confirmed that the movement of vehicles in Russia has become unprofitable during the second half of 2014.

Rumours that Seat was planning to stop sales in Russia first appeared several months ago. Analysts have noted that, along with a drop in the Russian market, the OEM had a “lack of competitive models and inefficiency in the advertising policy”.

The move follows a similar decision made by Chrysler’s Dodge brand, with Russian experts suggesting other OEMs that do not have localised capacities in Russia, or a large market share, are also under threat of having to leave the market.

Analysts have said that in the coming months, the list of OEMs leaving the country could grow to include Fiat and Alfa Romeo, which are distributed by Chrysler’s local division. However, Alfa Romeo has said it currently has no plans to leave the Russian market.

Representatives for Chrysler and Fiat in Russia said that despite the difficult economic situation, the supplies to the Russian market would continue. In the first half of 2015, Fiat’s profile in Russia will be boosted with the launch of two new models: the MPV 500L and the crossover 500x.

Alfa Romeo asserted that it had a specific place in the Russian market. The company said the brand has its fans, but admitted this did not amount to big sales. “Even if they increase, the company will still have a very small market share,” explained Catherine Chmeleva, sales director of Russian car distributor Rolf Altufievo. “But the manufacturer has not put any ambitious goals in place so far; [it remains] a niche brand in the Russian market."

In the next six months, analysts forecast that larger players may also leave the country, including Citroen and some Chinese brands. Currently however, spokespeople from JAC and FAW say that despite the devaluation of the ruble, among other problems, they feel comfortable and don’t have any plans to stop imports.

According to Vladimir Popov, president of Favorite Motors – a Russian dealer for Seat, Chevrolet, Volvo, Kia and Ford – the main reason for the departure of Seat and Dodge was the unwillingness of the parent company to invest in localisation of production, and the high level of competition in the segment. The situation has been made more problematic by the devaluation of ruble, which has made the import of small volumes unprofitable.

“At the same time, Seat got to the Russian market very late and did not have time to gain a foothold here,” said Vladimir Mozhenkov, vice-president of Russian dealer Avtospetstsentr. The company’s latest attempt to enter the Russian market was its fourth.