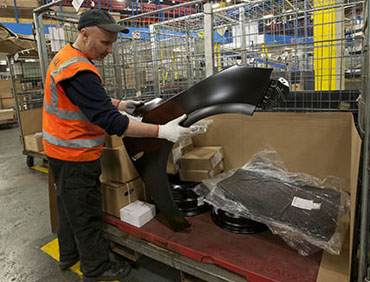 Have you changed your outsourcing strategy for service parts operations?

As with other parts of the automotive supply chain, outsourcing strategies tend to vary by OEM, region and operation. Transport services, of course, remain outsourced, although some carmakers – such as Toyota on the west coast of the US or in Japan – do have their own fleets. For larger regional parts and distribution centres, mixed models are in place. A basic rule of thumb is that the larger the operation, the more likely a carmaker is to keep it in-house.

Goel thinks that carmakers are simply more able to remain customer focused and flexible if they run their own parts centres. Before he joined

Volkswagen Group of America, four of the company’s then five warehouses were outsourced, which Goel promptly took in-house over the course of 2013 – before adding three additional in-house centres. He says the carmaker has since saved money and improved performance.

dealers, which has long been outsourced.

There is no single doctrine across the industry. At Opel, Kai Rabe says the carmaker has both insourced and outsourced warehouses, though 3PLs are more likely to run smaller facilities. Neil Swartz says Toyota also uses some outsourcing in its network in the US where it makes sense. BMW, meanwhile, has recently awarded its new regional distribution centre in

South Korea to French logistics provider Geodis, while in Germany one of the new operations for the restructured ZTA has been outsourced to Kuehne + Nagel and Imperial Logistics. It has also outsourced its new ConDC to Senator Logistics.

David Carlisle thinks that 3PLs will have to “chin up” to improve their performance to be on a level with the best OEMs. While he says that some perform well – he points to Ceva Logistics in the US in particular – many have to improve their services, systems and cost to stay relevant as the drive to increase customer service continues.

What skills are most important for employees working in service parts logistics today and in future compared to 20 years ago?

Executives point to the obvious areas in technology and data that employees must understand today which may have barely existed in the 1990s or even the 2000s. David Carlisle says that he would love to have a cadre of staff who work with data analytics tools like SQL and Python, for example. Kai Rabe thinks that the abundance of data available in the supply chain means managers must increasingly be more than logistics or warehouse experts and understand how to use such information to inform business decisions.

But while logistics employees are increasingly working in IT, executives also stress the importance of softer skills, notably the ability to manage change.

Both Rabe and Neil Swartz think that, with the pace of logistics change accelerating, OEMs will need people who can keep up with an increasingly complex world.

Anu Goel also stresses the importance of intellectual curiosity, both to deal with technological change and also to compete. With the OEM share of the aftermarket typically below 30%, he encourages companies to hire people and bring ideas from other sectors, or even competitors like independent distributors.

What capabilities does a logistics provider need today and in the future to succeed compared to in the past?

Similar to their own staff, OEM executives want logistics providers who can manage new technology and IT systems and understand data analytics. As today, logistics providers are expected to be as financially sound, transparent and flexible as possible – and at the right price.

In line with their own changing priorities, executives also want logistics providers committed to improving service for end customers. And those able to bring innovations and ideas to help OEMs gain new customers stand to gain as much in future as they do now.