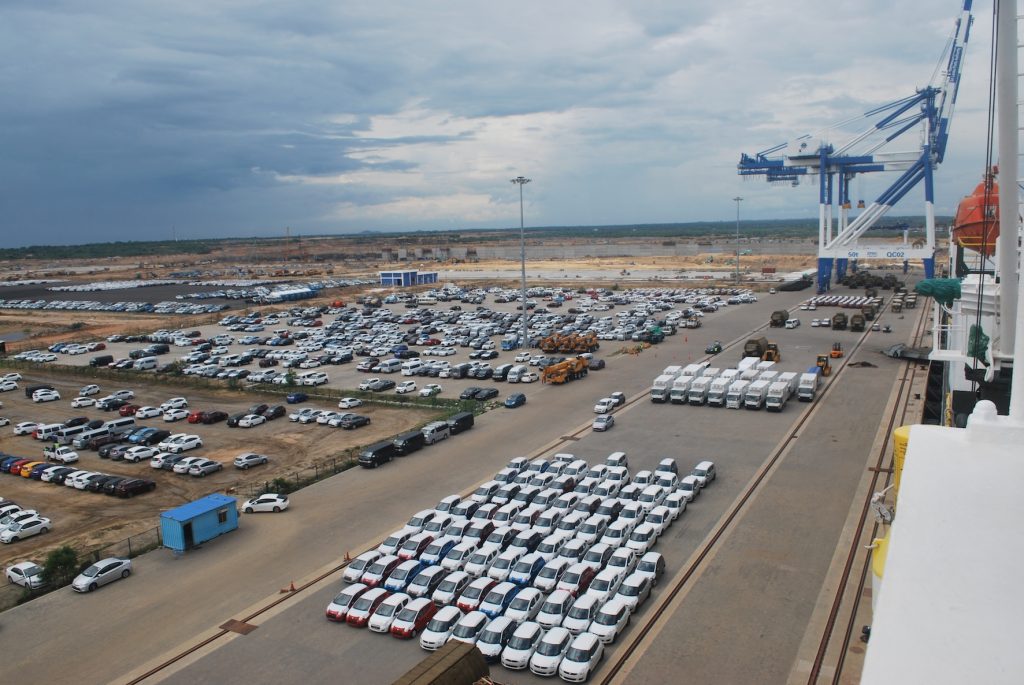 While it may seem an unlikely destination, the Sri Lankan port is a growing automotive hub for transhipments from Asia to global markets. The right mix of incentives, capacity and shipping links have been catching OEMs' attention.

Sri Lanka, the island nation off the southeast coast of southern India doesn’t manufacture vehicles and has a small vehicle market, its brisk trade in reconditioned vehicles notwithstanding. All in all, it seems an unlikely destination for a finished vehicle hub port. However, the new deep-water port of Hambantota on the island's south coast, located just off the main east-west shipping route across the Indian Ocean, is rapidly becoming a transhipment hub for global OEMs with plants in Asia.

Japanese, South Korean and Indian carmakers have begun transhipping increasing numbers of vehicles through Hambantota, whose official name is Magam Ruhunupura Mahinda Rajapaksa. Companies have been drawn by its convenient location, deep draft, availability of storage space, and attractive tariffs and incentives offered by the Sri Lanka Ports Authority (SLPA).

Click on the links below to read the different articles that make up this report.

Previously, car carriers used to call at the west coast port of Colombo, south Asia's container transhipment hub. Today, however, Colombo handles only new Indian vehicles meant for the domestic market on a direct-delivery basis. Indian transhipment vehicles and cargo from other origins, including new and reconditioned Japanese vehicles, go via Hambantota. The port is also increasingly being seen as a viable transhipment point for vehicles built elsewhere in Asia and southeast Asia, including Thailand, Japan and even China, for onward destinations to Africa, the Middle East, Europe and South America.

The shift of vehicles from Colombo to Hambantota port began two years ago, but the port’s history begins after the 2004 Indian Ocean tsunami devastated the area. The greenfield port, financed mainly by Chinese loans, saw its first phase opened in November 2010 and is being expanded further. Thanks to on-going development, it now has a large basin and plenty of space ashore, especially when compared to Colombo. By the time its second phase of development is complete, it is expected to surpass Colombo in overall size.

The SLPA had plans to increase vehicle transhipment at Colombo for many years, but business did not grow as expected because of space constraints. Indeed, the transhipment market at Colombo declined from around 5,000 vehicles in 2009 to fewer than 900 by 2011. A reduction in Sri Lankan import duties in 2012 led to a flood of car imports into Colombo, which lacks berthing space as well as land. Since then, vehicle volume through Hambantota has rocketed.

In the first nine months of 2014, the number of vehicles handled at Hambantota crossed the 100,000 mark, up more than 300% compared to the same period in 2013, with the number of ship calls more than doubling to 161. The recovery in India's carmaking industry – particularly a rise in exports from the subcontinent – and southern India's emergence as a small car manufacturing hub have also helped, with congestion in Chennai port prompting more vehicle transhipment through Hambantota.

Hyundai's plant near Chennai is the biggest user of the port, while Tata and Maruti vehicles also come from Mumbai. Japanese OEMs typically prefer direct delivery to destination ports of vehicles exported from the country, but executives at shipping lines say they are now considering transhipment through Hambantota of vehicles made in plants outside Japan, such as Thailand, to which more production is shifting.

"There's a lot of potential for vehicle transhipment at Hambantota," says Wasantha Talagala, managing director of ABC Shipping, agents for Japan's 'K' Line. "There's plenty of storage space and the location is ideal, making it easier to distribute vehicles from India and southeast Asia to Africa, the Middle East and Europe."

K Line vessels from Indian ports call at both Hambantota and Colombo ports at least twice a month, carrying more than 1,000 brand new Indian-made vehicles, both for transhipment and the domestic market. Shipments of around 500 Japanese vehicles, 90% of which are reconditioned, arrive about once a month. K Line shipments to Africa consist mainly of new Ford and Nissan cars built in Chennai. The company’s African cargo previously moved through Singapore, but the line wants to route east African cargo via Hambantota in future, according to Tressel G Silva, general manager of operations at ABC Shipping.

With OEMs depending on shipping lines to match their just-in-time production requirements, car carriers want a fast turnaround at ports. "The lines want quick transits – not more than six or seven hours," Silva adds.

Vessel masters who call at Hambantota speak regularly of noticeable improvements. "I'm amazed at how rapidly the port's business has grown since I last called a couple of months ago," declares Captain Jose Maria Pulmones of the K Line vessel, MV Barcelona. He speaks while on-board, chuckling that the interview must be quick because, "In three hours from now, we sail". He notes that Hambantota will be an even more important port in five years.

Hambantota has a depth of 17 metres and two general-purpose berths with a total length of 600 metres. The 1km-long, 210 metre-wide entrance channel of the port, which is only about 10 nanometres from the shipping lane, has a depth of 16 metres, and is being dredged to 17 metres. Two ZPMC Ship-to-Shore gantry cranes have been installed, each with a capacity of 50 tonnes under spreader, with an outreach of 50 metres. 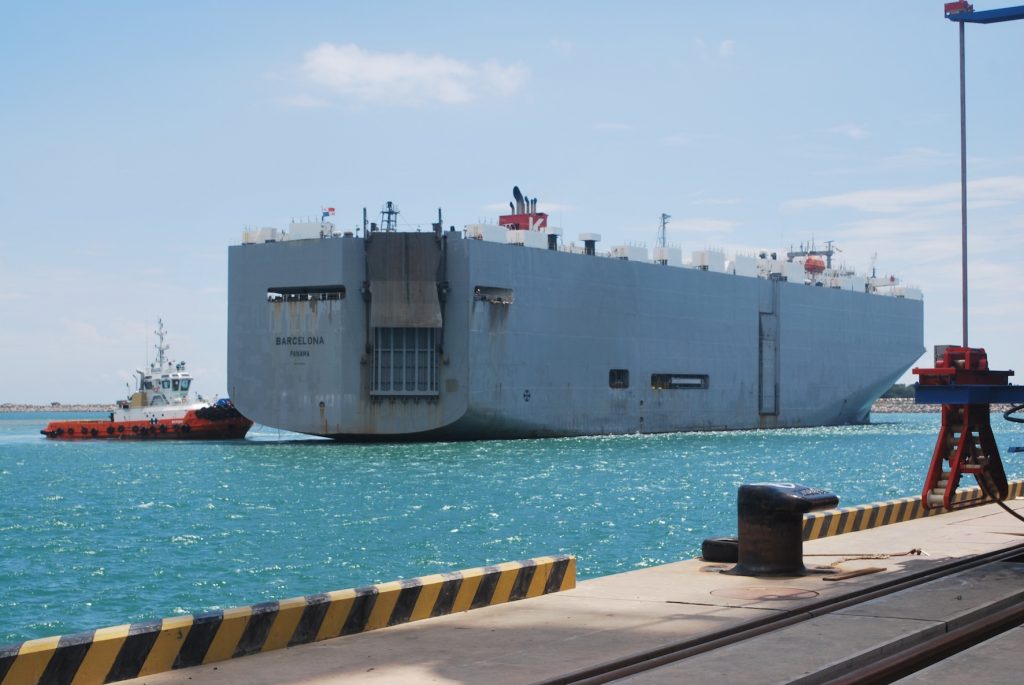 Car carrier MV Barcelona berthed at Hambantota Port. K Line vessels from India call Hambantota and Colombo ports at least twice a month, including with Ford and Nissan vehicles eventually bound for Africa
Agil Hewageegana, director, southern ports development at SLPA, explained that while ships take four hours to sail to Colombo from the main shipping route skirting the south coast, it's only 45 minutes to Hambantota. "Hambantota is centrally located to serve the sub-continent," he says.

A number of SLPA incentives and facilities make the port attractive, such as on-arrival berthing. A young, energetic band of stevedores, recruited largely from the locality, maintain high loading and unloading speeds.

Singapore only offers 14 days of free storage, while Hambantota offers 21 days. Furthermore, if the 21-day limit is exceeded, Hambantota's charges only apply from the 22nd day under the present scheme, whereas previously they were applied with retrospective effect, from day one. 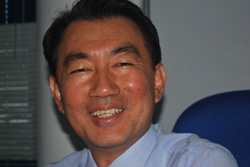 SC Byun, from Great Eastern Shipping, a Glovis agent, says that Hyundai will eventually tranship vehicles from Korea, China and India at Hambantota
SC Byun, managing director of Great Eastern Shipping, agents for Hyundai Glovis in Colombo, says Hyundai vehicles made in Chennai and South Korea were earlier transhipped through Singapore. Using Hambantota has reduced costs and sailing time. "We can save about three days sailing by calling at Hambantota."

The SLPA gives a 53% discount on its transhipment tariff of $1.50 per cubic metre for lines moving more than 3,000 units a month at Hambantota, an incentive Hyundai Glovis enjoys, as its volumes are higher. About ten Hyundai Glovis car carriers call every month, with shipments of 500-3,000 vehicles each. From Chennai alone, Glovis tranships 3,000-5,000 units a month through Hambantota.

In future, all Hyundai vehicles made in three origins – South Korea, China and India – will be transhipped through Hambantota. Byun envisages shipping up to 15,000 units a month once more yard space is available.

Takaya Soga, general manager of the auto logistics group at NYK Line, says that the carrier usually calls 3-4 times per month at Hambantota. "Volumes are increasing rapidly as a gate port for export cargo from India due to SLPA's strong initiative to develop the port facility and service," he says. "We are monitoring the situation to see if the port will work as a regional hub port for transhipment by assuring quality of service on cargo operations and yard management to accommodate the requirements of customers like car manufacturers and shipping lines."

Mitsui OSK Lines (MOL) car carriers call at Hambantota 2-3 times a month and once a month at Colombo port, says Chandima Hulangamuwa, managing director for MOL Lanka, the Sri Lankan agent. He believes it will take time for lines like MOL to develop Hambantota as a vehicle transhipment hub, especially as Japanese manufacturers might need more persuasion before trying the new port. An MOL representative recently visited Hambantota to see its transhipment potential.

“I’m amazed at how rapidly the port’s business has grown since I last called a couple of months ago.”
– Captain Jose Maria Pulmones, “K” Line vessel, MV Barcelona

Still, the line sees potential in different markets. "Vehicles made in countries like India, China and Thailand bound for markets in Africa and South America could be transhipped through Hambantota," explains Hulangamuwa.

Initially, the incidence of damage and missing items did cause concern at the port, says Peries. However, these have greatly reduced with better training of crews and security. CCTV was installed and parking areas were fenced out. Höegh Autoliners does 2-3 calls a month, and Peries says when the line restructures its services in 2015, it's likely to make more calls at Hambantota.

The SLPA is making investments to improve ro-ro operations. It will increase the present paved area of 12.5 hectares, enough to park 10,000 vehicles, by another 30 hectares. It has also promised warehousing for parts and machinery, more cranes, and a Mafi truck. Hambantota’s automotive future may only just be starting to take shape.

This article was updated on December 17th.