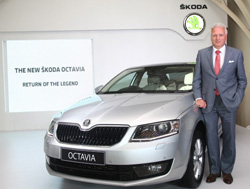 Skoda has begun production of the new Octavia at its factory in Aurangabad, India, which is assembled from kits built in the Czech Republic.

The new Octavia, which was launched in Europe in late 2012, arrives in India following investments to reduce manufacturing and logistics costs at the carmaker’s Indian factories in Pune and Aurangabad, according to Skoda’s most recent annual report.

Octavia is the Volkswagen Group-owned Skoda’s best selling and most-produced model, with more than 406,000 Octavia cars assembled last year at its mother location in the Czech Republic, as well as in Russia and China.

However, India is likely to only represent a small share of production over the next year. In 2012, the Aurangabad plant assembled 12,600 Volkswagen, Audi and Skoda vehicles, mostly from kits delivered from Europe. The Volkswagen Group plant in Pune produced 96,000 vehicles, including more than 29,000 Skoda vehicles.

India car sales have slowed so far this year by around 12%. Skoda sold around 13,800 vehicles in the first seven months of the year; its sales in the calendar year 2012 were more than 30,000 units.

In an interview with India’s Economic Times, Skoda chairman Winfried Vahland (pictured) criticised government policy and regulations for holding back the economy and foreign direct investment. “The economy is not moving, interest rates are high, customer demand is not good, and sometimes also the policy is not in favour of attracting investments. There is lot of uncertainty in regulations etc. So it is not a good environment,” he said.

Skoda, which sold nearly 940,000 vehicles last year globally, has set a target of increasing sales to 1.5m by 2018. While the company has certainly pinned hopes on the new model selling well in India, Vahland admitted that he could not predict how large a role India would play in reaching that figure, but said it would depend on the economy and the policymaking.