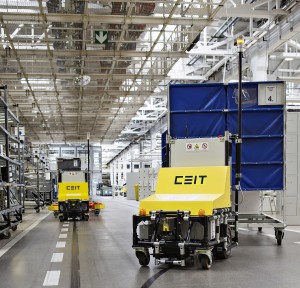 The award from the ELA – a federation of 30 national organisations from across Europe – has been described by Skoda as having similar principles to the Champions League – the top tournament among European football (soccer) leagues. The winning 30 projects from national competitions reached the final. The projects were then narrowed down to six finalists, across various industrial sectors.

The winning project had to implement a number of strategic guidelines for logistics planning with the aim to manage, overcome or eliminate process complexity in logistics. Increasing complexity is a growing challenge in the logistics industry (and was a key theme in the discussions at the recent Automotive Logistics Global conference in Detroit). Skoda eliminated complexity by utilising optimal process automation, and managed complexity through its adoption of pick-by-systems in its plants and warehouses. The ELA found that Skoda had made significant savings, and improved productivity across various fields.

“We are delighted to have been recognised at a European level,” said Jirí Cee, head of Skoda brand logistics. “Over recent years, Skoda has invested heavily in its production logistics, and consistently fine-tuned the area to the highest efficiency, perfecting the processes. The result has been one of the most powerful logistics systems in the automotive industry. It is here that the production area is making a significant contribution to Skoda’s growth strategy.”

Skoda’s logistics system incorporates 13 production facilities globally, and ensures the right vehicle components and parts are available across the entirety of the logistics chain. In the first eight months of 2014, Skoda produced 696,000 vehicles.

Skoda set up a new Logistics Centre at the start of 2013 and has improved logistics at its main Mlada Boleslav factory in the Czech Republic by installing new conveyor systems. The OEM has added 33 high-bay racks in an 18 metre high, 15,500 sq.m, semi-automated logistics hall, which will supply the site’s powertrain and vehicle manufacturing areas with materials. Skoda has also installed a fully automatic, 60-metre conveyor tunnel to its production hall, along with new warehouse technology which it says ensure the fast, flexible and highly efficient supply of parts.

According to the OEM, Skoda saves time and costs by using a new fully automatic transport trolley at its Mlada Boleslav plant. The system is automated and delivers parts and components directly to shelves on the assembly line. The OEM also uses ‘pick-by’ systems to ensure just-in-sequence is achieved and since 2013 has also been using a sequence container with ‘pick-by-frame’, which helps employees loading picking carts, making the process safer.

Skoda’s parts centre was also modernised in 2013. The warehouse area doubled to more than 100,000 sq.m, making it the largest genuine parts centre in the Czech Republic. The centre now receives around 25,000 daily deliveries, and supplies parts and accessories for Skoda, VW, Audi and Seat.

Each year, Skoda makes around 52,000 shipments by rail alone between the three Czech Skoda plants. In addition to this, 469,000 trucks are sent to and from the three locations.

Last week, fellow Volkswagen Group brand Audi took the top prize in a group-wide logistics innovation workshop for its use of 'geo-fencing' to speed up inbound truck check in at its factory in Ingoldstadt, Germany.