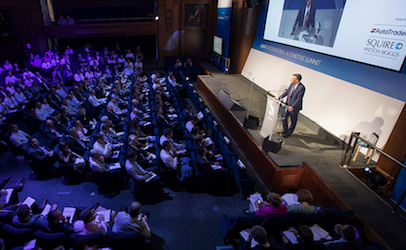 The Society of Motor Manufacturers and Traders (SMMT) has joined major manufacturers in calling for the British government to end uncertainty over the UK’s trading relationship with the European Union after Brexit, and to ensure the frictionless flow of parts and vehicles.

Speaking at a press conference during the SMMT’s annual summit in London on Tuesday (June 26), the industry body’s chief executive, Mike Hawes, said that the government should abandon several of its ‘red lines’ in negotiations, including leaving the European customs union and most of the single market, which allow for goods to be traded freely without customs checks, clearance or tariffs.

“The government has set red lines, but these red lines go directly against the interest of the UK automotive sector which has thrived on single market and customs union membership,” said Hawes.

Uncertainty over trade could cause manufacturers to hesitate in making new investments in the UK. Already, investment in automotive manufacturing in the UK has dropped by half this year compared to last year, according to SMMT figures.

While the UK government appears to be divided in its approach to Brexit and has failed to clarify solutions on key areas like the Northern Irish border or customs arrangements, the prime minister, Theresa May, has insisted the country will leave the customs union and single market after a period of transition that could last until December 2020.

Chris Grayling, the secretary of state for transport, told delegates at the SMMT summit that he was confident the UK and EU would reach a “sensible agreement” to protect trade on both sides, even as the UK leaves the customs union and single market.

“We will strive to reach as frictionless trade as possible between UK and EU and prioritise economic advantage and vibrant industries like the motor industry,” he said.

The UK government was also committed to gaining control over its border and regulations, and negotiate trade agreements with countries outside the EU to find new opportunities, said Grayling.

However, the SMMT and other industry representatives have expressed concerns that, even allowing for a transition period, the government’s stated ambition includes new logistics barriers.

“’As frictionless as possible’ is not good enough. We need frictionless,” said Hawes. “The government must rethink its position on the customs union.”

Ian Robertson, a former board member for BMW who is now its special representative in the UK, told journalists that no model under discussion was currently as beneficial as what the UK industry currently has. “Britain doesn’t need to leave parts of EU, such as shared regulations and borders, for example,” he said.

However, the UK government’s desire to end freedom of movement and avoid the jurisdiction of European institutions like the European Court of Justice raises questions over how it would be able to maintain completely open trade with the EU.

A growing chorus of concernLarge manufacturers have started to express their concerns over trade and logistics more forcefully. Airbus has said that it was considering relocating its aerospace manufacturing outside of the UK, in part out of fear that it would not be able to access its European supply chain in the face of border checks after the end of a planned transition period in December 2020.

Honda and BMW have also acknowledged that any delays to their just-in-time and just-in-sequence manufacturing as a result of customs checks between the UK and EU would lead to higher costs and lower productivity, including large investments in warehouses, new IT systems and customs agents.

BMW’s customs manager, Stephan Freismuth, told the FT that stops at the border could ultimately lead the carmaker to end production at its UK plants. “We always said we can do our best and prepare everything, but if at the end of the day the supply chain will have a stop at the border, then we cannot produce our products in the UK,” he said.

Ian Robertson said that the carmaker would not be pulling out of the UK after Brexit. However, speaking at the SMMT press conference, he warned that logistics delays impact lean production and would make UK operations less competitive.

“Our Oxford Mini plant brings in 5m parts per day and 250 trucks through the channel tunnel, working in a seamless operation in a European supply base,” he said. “We don’t want to see delays or impediments. If we do, we will have to invest in things to overcome that, whether warehousing, customs systems, and we could see production being slowed for hours or days at a time.”

Waning investment without certaintyThe UK automotive industry has proved resilient since the referendum vote two years ago, with strong volumes and revenue through 2017 despite declines in sterling and economic headwinds. However, the first half of 2018 has been more “ominous”, said Mike Hawes, with sales and production slowdowns, job losses and significant drops in investment.

Ian Robertson described Brexit as a “distraction” from carmakers focus on advancing technology, such as zero emission vehicles and autonomous driving. “Investment requires certainty,” he said.

Brexit and threats to trading arrangement are not the only issue facing the UK automotive industry, which is also struggling with fast declines in diesel sales, uncertainty over environmental regulations and threats from escalating trade tariffs with the US. However, Hawes warned that uncertainty over the EU could prevent carmakers from making further investments in new models, and he stressed the need for the industry to retain its current benefits.

“There is no Brexit dividend for our industry, particularly in what is an increasingly hostile and protectionist global trading environment,” he said. “Our message to government is that until it can demonstrate exactly how a new model for customs and trade with the EU can replicate the benefits we currently enjoy, don’t change it.”