Sollers looks to export to the East 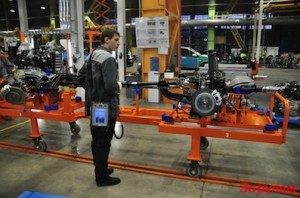 Russian automotive company, Sollers, is looking to expand exports with its joint ventures, as it faces a continuing fall in domestic sales, recently disclosed plans reveal.

According to the head of Ford-Sollers, Mark Ovenden, the OEM is currently evaluating the potential for exporting finished vehicles and components from its St Petersburg plant, presumably to Eastern Europe.

“Currently we are exporting some vehicles to CIS markets, but this is mostly about new directions in Eastern Europe,” Ovenden said, adding that it is likely the OEM will begin by exporting engines.

Production capacity in Russia stands at 3.5m cars per year, but executives at Ford-Sollers forecast that sales in 2016 will be around 1.5-1.6m units. Therefore, exports could be crucial for struggling OEMs.

Sollers plants in Russia could also be used for the production of automotive kits to export to Vietnam. The OEM has recently been granted the right to supply Vietnam with kits with no duty charges.

Viktor Evtukhov, the deputy head of the Russian Ministry of Industry and Trade granted the right for the duty-free supply of 13,000 kits for three Russian OEMs: Sollers, GAZ and KamAZ. This figure doesn’t however include automotive kits destined for further re-export to other ASEAN countries.

“Within the agreement, our carmakers will have to bring the level of localisation to 30% by 2020, and we estimate that the implementation of this trade agreement will save up to RUB3 billion ($45m) for our carmakers on logistics spends,” Evtukhov said.

The duty-free import of automotive kits has been approved for three years, but according to Russian authorities, production platforms in Vietnam could become an important foothold to help improve the position of Russian carmakers in South-East Asia.

Mazda and Sollers are also looking to increase exports. The OEMs are currently evaluating the potential of a new engine plant near Vladivostok, at the Russian Far East. Sollers president, Vadim Shvetsov, said that the engines produced there would be designed for Mazda plants in Asia only.

The project would require RUB2 billion ($28m) in investment, and is scheduled for 2017. Shvetsov stressed that there is a great opportunity in the Russian Far East to start an export-focused strategy, and manufacture plastic products for automotive equipment destined for Korea, China, and Japan.