Sollers plans to relaunch assembly of SsangYong vehicles in Russia 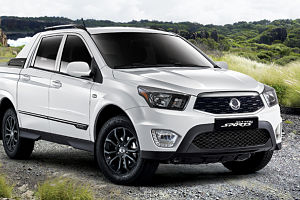 Speaking in a recent press conference, Vadim Shvetsov, the CEO of Sollers revealed that the Russian company plans to relaunch assembly of SsangYong finished vehicles at its plant near Vladivostok from next year.

He added, however, that this is being considered under a “the best scenario” as demand for SsangYong cars remains rather low at the domestic Russian market.

Sollers was assembling SsangYong vehicles at its plant in Primorsky Krai, on the Russia’s Far East up until March 2015, when collapsing sales forced the company to shut down the production line, and also to stop importing finished vehicles from South Korea shortly after.

SsangYong returned to the Russia’s market in January 2017, importing three crossovers: Actyon (pictured), Tivoli and XLT. In total, Sollers, which remains the official distributor of SsangYong cars in Russia, managed to sell just 70 vehicles in the first half of 2017.

In comparison, during the first half of 2015, when the brand left the market , it sold more than 1,000 units in total.

On this background, the statement of Shvetsov looks surprising, especially because in early 2017 the spokesperson of Sollers suggested that it would consider relaunching assembly of SsangYong, as soon as the company was able to sell 500-600 finished vehicles per month.

At the moment, SsangYong’s finished vehicles are imported directly to the European part of Russia, according to official company’s information. Prior to March 2015, the company’s cars were supplied from the Russia’s Far East to the central regions by rail, and those supplies were subjected of the logistics subsidies of the Russian government.

Shvetsov added that since 2015 the carmaker has changed the model range, and so a retooling of the assembly line would be necessary.

SsangYong leaves Kazakhstan?Meanwhile, the assembly of SsangYong finished vehicles was recently shut down at the Saryarka AvtoProm plant in Kostanai Oblast, Kazakhstan.

It is known that the company’s assembly plant in Kazakhstan has not doing well since 2013, when economy crisis erased in most part of post Soviet space, including in Kazakhstan.

At the design production capacity of 25,000 finished vehicles per year, the assembly line produced only 300 units in 2015, 97 in 2016 and 4 in 2017, according to the data from Kostanai Industry and Commerce Committee.

It is understood that the last finished vehicle was produced there in March 2017 and now the line stands permanently shut down.

SsangYong was manufacturing only one model in Kazakhstan, named SsangYong Nomad, which in fact is rebranded Actyon with slightly changed design.

The country’s government invested US$61.9 million into the assembly line, expecting that the finished vehicles would not be only delivered to the domestic market, but also supplied for export. However, for unknown reasons, not a single finished vehicle was delivered abroad.

In mid-2016 the governmental agencies of Kazakhstan revealed that several tier-one suppliers agreed to open production facilities in the country, in order to import localisation of SsangYong assembly. However, according to official information, none of those projects has been implemented.