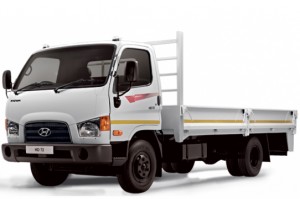 Truck assemblers in South Africa have been told that they have two years in which to increase local content or lose tariff breaks. However, industry players have questioned whether the policy will be able to encourage manufacturers to invest in more local stamping and production operations given the country’s relatively small domestic market.

South Africa’s Department of Trade & Industry (DTI) has said that by April 2017 the current tariff free regime for semi-knockdown (SKD) will no longer be supported; instead, only complete-knockdown (CKD) assembly will qualify for tax breaks.

Low volumes mean that local truck assembly in South Africa largely depends on SKD assembly. The domestic truck market totals around 30,000 units a year, as opposed to the around 620,000 cars and SUVs sold locally last year.

Cabs and the chassis are brought in separately and melded together. Local content is minimal, according to the DTI.

The South African government's proposed Medium and Heavy Commercial Vehicle Automotive Investment Scheme (MHCV-AIS) hopes to change that. It proposes that the MHCV-AIS return 20% of the total value of manufacturers' investments to relevant vehicle manufacturers, while 25% also goes to components and tooling companies. MLOTA 'hopes' to have the final MHCV-AIS document ready soon.

“It is not yet legislated, but it should be the case in the next 12 months. Yes, we want to phase out the current support for SKD assembly,” Mkhululi Mlota, DTI Automotive’s chief director told Engineering News.

However, industry participants and experts are doubtful whether legislation could promote a viable industry. Nico Vermeulen, director of the National Association of the Automobile Manufacturers of South Africa (Naamsa), told Automotive Logistics that the DTI wanted to coerce assemblers into making truck cabs locally, something he called a “pipe dream”. Currently all cabs are imported and added to the chassis locally.

“To manufacture cabs locally will mean the panels will have to be stamped here; this will require a stamping plant,” he said. “Add to that a body shop for assembly, a painting shop and a finishing works, and you have a sizeable investment of up to a billion rand. You can’t amortise the capital costs if you are producing maybe 2,000 units a year.”

Vermeulen added that manufacturers were talking to the DTI over the issue. “It is highly unlikely this will ever happen. We expect the DTI will stick to existing incentives to drive truck assembly manufacturing,” he said.

In September, Hyundai opened an SKD assembly plant in Apex, the industrial area of Benoni, near Johannesburg. It aims to produce 50 units a month, focusing specifically on the Hyundai HD65 and HD72 trucks. The company is also considering the assembly of the heavy-duty Hyundai Xcient truck range, a decision that will be influenced by the new tariff rules, said Wade Griffin, commercial vehicles director for Hyundai South Africa.

“The truck market is small in volume compared to passenger vehicles and therefore any major changes could be negative depending on what gets finalised. It could definitely influence our decision; it all depends on the changes that are made to the AIS. We hope that the AIS is finalised soon,” Griffin told Automotive Logistics.

The FAW plant cost R600m ($53.5m) to build and represents one of the largest investments in South Africa by a Chinese manufacturer. It has targeted 5,000 trucks a year.

According to recently released figures by industry body Naamsa, year-on-year sales of vehicles in the medium- and heavy-truck segments of the industry show a modest improvement. In September this year 904 medium and 1,853 heavy vehicles were sold, about 1% more than September 2013.

Heavy truck and bus sales in September fared better with an improvement of 268 units or 16.9% compared with the previous year.