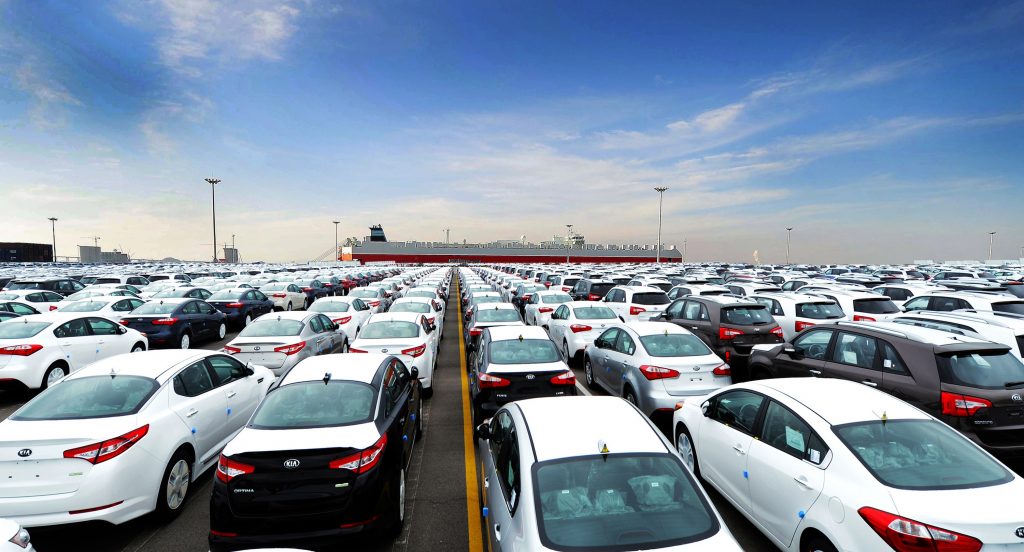 Still expanding during a period of relative stability or even decline in exports, Pyeongtaek-Dangjin port is also searching for terminal efficiencies

Pyeongtaek-Dangjin port is South Korea’s largest for moving finished vehicles, with volume in 2014 at a record 1.5m total units, including transhipment, used and commercial equipment. That is nearly three times the amount it handled in 2009, and around 300,000 units above the port’s technical capacity, putting plenty of pressure on parking and vessel space.

Pyeongtaek is about 15km away from Kia Motors’ car plant in Hwaseong, which can build 600,000 vehicles per year. The plant is near the sea, but the water is too shallow to receive vessels, so Kia has its own yard at Pyeongtaek terminals four and five. The port handles more than 60% of the carmaker’s annual exports from South Korea, according to managers from the export logistics team. Last year Kia exported around 770,000 new cars from here, an 8% rise over 2013.

A ‘day in the life’ snapshot of Kia’s terminal reveals the speed and flexibility of the carmaker’s export operations, as well as the potential for efficiency gains and IT improvements. One export manager at the port describes the work here, rather humbly, as “routine”, but with around 2,700 vehicles passing through the terminal everyday, it’s a routine that masks considerable complexity.

While the majority of Kia vehicles arrive at Pyeongtaek from Hwaseong, vehicles are also trucked here from its joint-venture plant in Seosan, west of Dangjin, and Sohari, south of Seoul. A small percentage of vehicles also arrive from Gwangju, in the south, although in recent years Kia has increasingly used the southern port of Mokpo to serve southern plants. 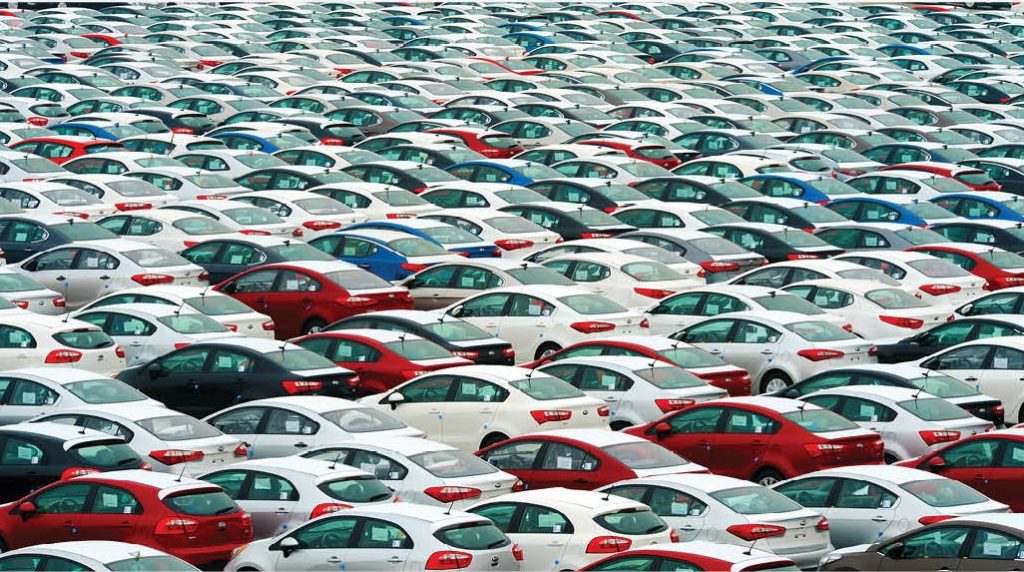 The Kia vehicles arrive continuously throughout the day, delivered by Hyundai Glovis. Upon arrival, they are handed over to Kia’s appointed stevedore and yard management company at the port, CJ Korea Express. CJ Korea inspects vehicles for transport-related damage (this follows Kia’s final inspection at the plant). Defects are reported to Kia, which may require the vehicle to be sent to plants or elsewhere for repair.

Kia’s distribution system allocates all vehicles prior to their arrival at the port, so after inspection CJ Korea verifies the allocation of each vehicle and assigns it the appropriate parking space. Once the car is parked, Kia sends through the necessary shipping and export documents, which CJ also verifies. This is a manual process that requires checking every unit against a list to make sure it is the right model destined for the correct country.

Kia’s terminal has capacity to park about 9,000 cars, with about 150,000 sq.m of useable space for vehicles – small compared to ports handling fewer cars in North America or Europe. On average, vehicles stay at the port for around five days, according to Kia export managers. However, this requires a constant workflow to manage the capacity, especially since the terminal works just one shift. In typical Korean fashion, the day is long, starting at 8am and going as late as 9.30pm.

If South Korea’s logistics processes have a particular characteristic, it is their speed and flexibility. There are often two or more sailings per day from Kia’s terminals at Pyeongtaek, and around 55 per month, say export managers. The way drivers load vehicles onto the vessels is also quite special. The terminal imposes no speed limit for vehicles that are being loaded or unloaded, according to export managers, and instead cars are moved in lines with a lead escort that regulates the speed of the convoy. Even those used to flooring the accelerator on the German autobahn might be surprised at the speed these cars move along the yard’s open stretches. However, damage and accident rates at the port are low. 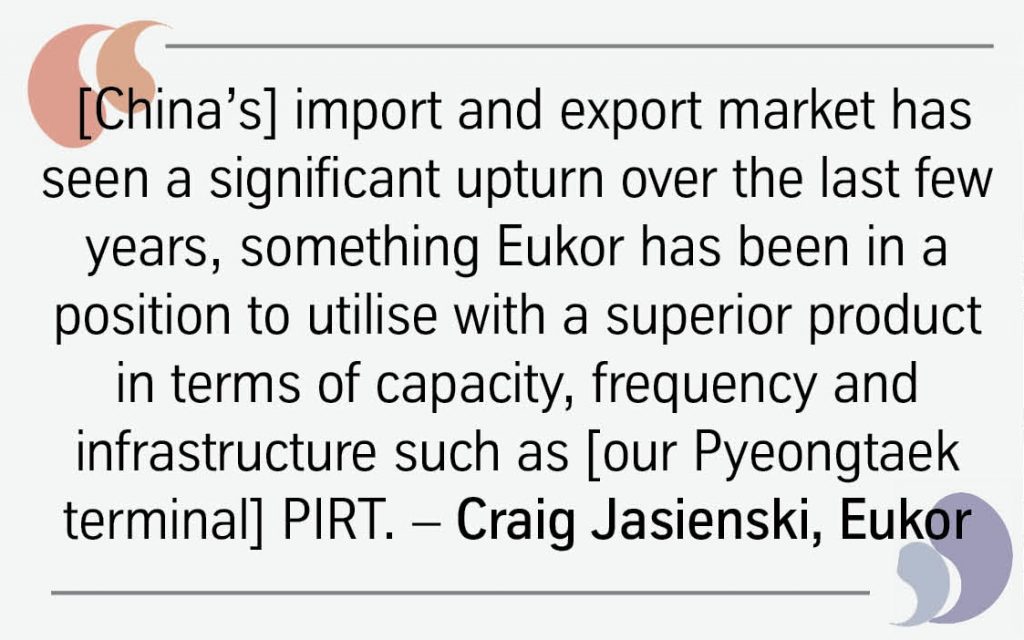 Vehicles from Pyeongtaek are destined across the world. Kia sells its cars in virtually every global market (its troubled northern neighbour notwithstanding), except for India, where Hyundai is dominant; just this past quarter, the first Kia vehicles arrived in Mexico, where the carmaker will begin sales this year ahead of building a new plant for 2016 (initial imports were from Slovakia and the US).

Some vehicles aren’t heading very far at all, as shipping lines in South Korea also pick up and drop off vehicles between domestic ports to facilitate transhipment or dealer delivery. Hyundai Glovis, for example, which handles around 40% of Hyundai and Kia exports, could drop vehicles off between Ulsan in the south-east, Mokpo in the south-west and Pyeongtaek or Incheon in the north-west, according to Sang Sok Suh, head of the planning group at Hyundai Glovis.

“We collect Hyundai and Kia vehicles from different ports to fill up space before going to Europe, for example, while some vehicles may also be unloaded for local distribution,” he says.

Looking for room to improve

Kia’s export team points to the potential for IT systems to bring more efficiency to the port’s terminal operations. Inspection processes are still manual and paper-based, for example. An export manager on site points out that he would like to see an RFID system at the terminal to track the vehicles on the yard, for example. Currently, Kia is not using RFID at its ports, even while Glovis uses it at some plant yards, together with GPS on its trucks to track movements between the plant and port. Such visibility could help Kia and others to overcome space and handling constraints at the port.

Although South Korea’s overall vehicle export market has been relatively stable or even declining slightly of late, Pyeongtaek’s volume has expanded. Next to Kia’s terminal, for example, is the PIRT Eukor-WWL terminal. Eukor’s president and chief executive officer, Craig Jasienski, says the terminal has seen strong volume growth, driven in part by cooperation with local and central government authorities, rising vehicle imports as well as exports, and also through trade with China. 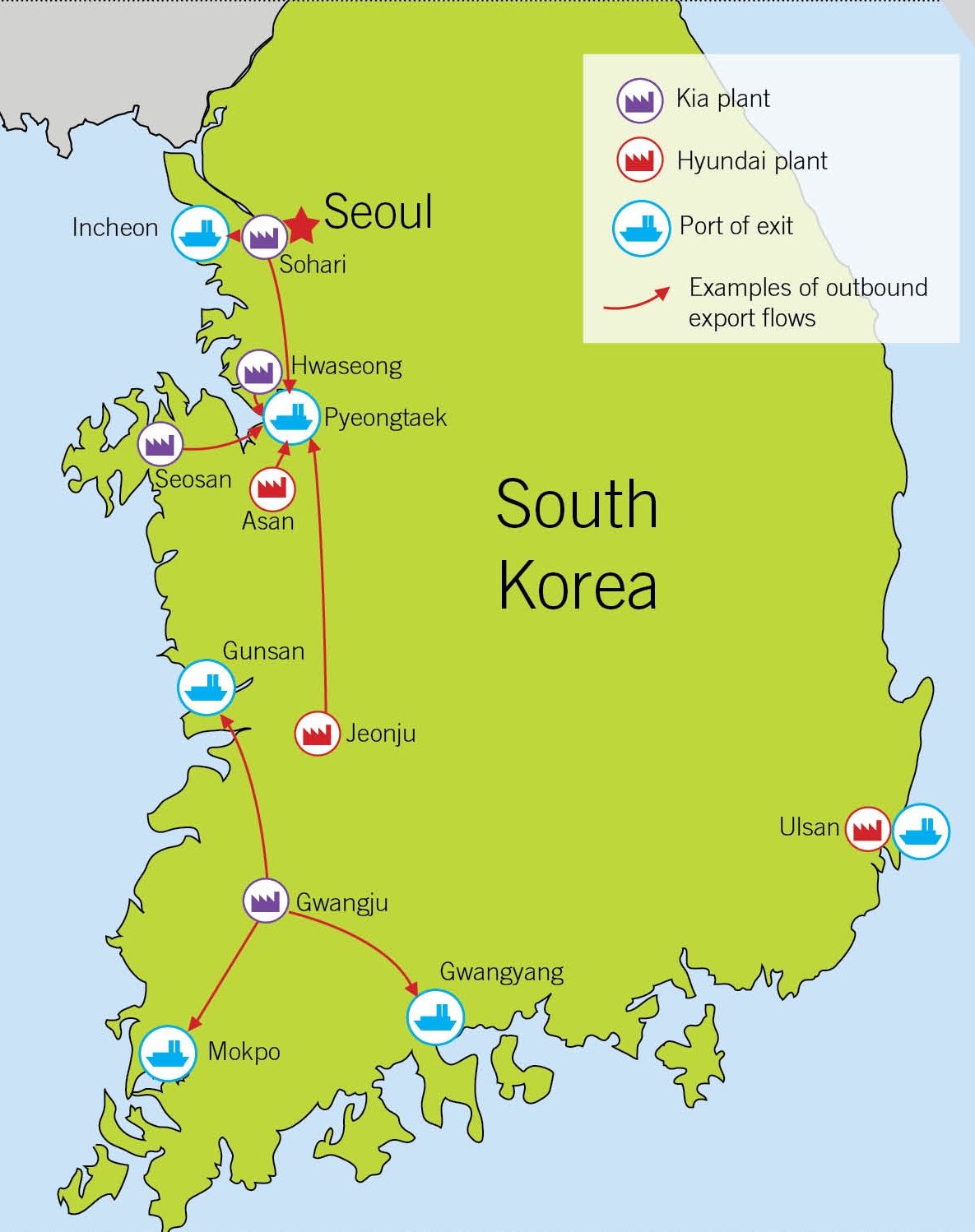 “Our Pyeongtaek terminal on Korea’s west coast provides an excellent platform for combining cargo to and from Korea and China,” he says. “The latter nation’s import and export market has seen a significant upturn over the last few years, something Eukor has been in a position to utilise with a superior product in terms of capacity, frequency and infrastructure such as PIRT.”

With this growth across the port, Kia export managers point out that space is a constraint, and there is little room for error to keep operations running smoothly. More investment is now coming to the port: by 2018, Hyundai Glovis plans to open its own terminal at Pyeongtaek-Dangjin terminal one, which currently handles ferries, containers, cement and steel products. Glovis will add a terminal capable of handling PCTCs of 50,000 tonnes, with the longest berth in South Korea; the company expects to expand vehicle-handling capacity by up to 400,000 vehicles. More space will be offered to both Kia and Hyundai, but high-and-heavy cargo will also be targeted.

Even with the new terminal opening nearby, other operators at the port welcome the move, including Kia and Eukor, the latter of which could serve the terminal with its vessels. “Pyeongtaek will continue to grow as a major car port in the area and we welcome all further developments in the port as it will benefit our deep sea network long term, and thus ultimately all of Eukor’s clients,” says Jasienski. Certainly, if such growth comes, it will benefit the entire industry.