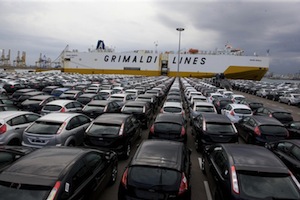 The Spanish Association of Automobile and Truck Manufacturers (Anfac) has released a report highlighting its global vision of how Spain can improve its provision of logistics services. Given that logistics now forms 10% of the overall end cost of a vehicle, getting this area right remains a key factor for countries wishing to remain competitive in the automotive market.

According to Anfac, the increasing globalisation of the automotive sector leaves Spain in a very privileged position in respect of its ports, since they are located at the mid-point between Asia and the Americas.

However, in terms of land transport, Spain is at a disadvantage, since it is located on the periphery of Europe, which means logistics costs are higher than for other plants on the continent, making it sometimes difficult for Spain to compete to build new models.

Nevertheless, over the next few years, demand for finished vehicles is expected to rise by 12m units globally, from the existing figure of 100m units per annum, which means that capacity at Spanish plants can be used to fulfil new markets other than the traditional ones in Europe.

Another disadvantage for Spain is that finished vehicles exports are much higher than imports, given the somewhat modest domestic market. This can often result in some vessels being forced to operate well below capacity when calling at national ports.

Significantly, while the World Bank's Logistic Performance Index places Spain in 18th position overall in the world, it is still behind other major automotive production rivals such as Germany, the US or Japan, despite being higher than Poland, the Czech Republic, Turkey and Italy. Within Europe, Spain also ranks below both France and the UK, so needs to improve.

The report suggests that Spain must exploit synergies between different transport modes and also between operators. This type of thinking has led, in recent years, to the sector developing integrated logistics services, resulting in the optimisation of intermodal solutions. This is recognised by the logistics strategy launched by Spain's Economic Development Ministry, which views multi-modal solutions as a priority, although its plan offers no timetables or concrete actions as to when and how such measures will be implemented.

The report concludes by pointing out that logistics efficiency can often be a differentiation factor and could offer a competitive advantage to manufacturers in Spain, putting them at the head of the queue when new models are in the offing. Above all, Spain must aspire to produce more than the 3m vehicles it currently produces annually.