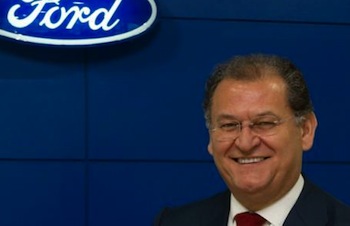 The president of Ford’s Spanish division, José Manuel Machado (left), has said that logistics remains the main "unfinished business" to ensure the future of vehicle manufacturing in the country, which is showing a marked improvement.

He stressed that, to be more competitive, vehicle factories in Spain needed to become ever more and better connected with markets in both Europe and in those in countries across the world. He suggessted that, if the industry's commitment to improve logistics connections continues, Spain could eventually produce around 3m units annually.

In his opinion, the cost of logistics "is higher" than the direct cost of labour and that getting these costs down is a challenge for car makers, but is vital if Spain is to remain an industrial country in the next decade.

Machado explained that, in 2008, the Ford plant in Almussafes (Valencia) lost production and its third shift, but that a plan was implemented allowing it to regain competitiveness, which resulted in the hiring of 1,500 new employees in September and the reinstatement of the third shift a year earlier than expected. At the end of November, the plant had increased this to 1,800 workers.

"We are even exporting to the United States, a country where Ford has many factories,” he said, adding that Spain is now considered to be something of a global centre to which important models and large volumes can be assigned.

His points about the importance of the market as a production base appear backed up by a recent report on the Spanish automotive sector published in the Spanish newspaper El País.

“Spanish plants are increasing production, being awarded new models and are creating employment,” said the report, adding that changes to salaries and labour flexibility are the keys to this improvement.

The report notes that the sector is showing definite signs of recovery, although this has to be seen against a backdrop where unemployment has reached 26% of the total workforce in Spain.

Flexibility among the automotive workforce has played a significant role since the 1990s and is key in the current upswing, which has seen the number of models in the last two years increase from 34 to 39. This is expected to grow to 45 in the next two years, according to industry body Anfac. As a consequence, production has increased over each of the last seven months, compared to previous drops, which had seen production slip to below 2m units.

In 2013, 2.2mcars were produced, with this expected to rise to 2.4m in 2014. In the peak years of 2003 and 2004, Spanish factories regularly built more than 3m units. Indeed, while overall unemployment continued to grow during the first two quarters of last year, the automotive sector created 2,400 jobs.

Investment last year amounted to €3.5 billion and is scheduled to be in the region of €1.5 billion this year.

In the meantime, salaries for sector workers have risen by just 3% since 2005, while many workers have received no pay increases at all, according to Mariano Cerezo of the MCA-UGT union.