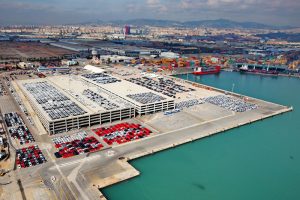 Most stevedoring strikes that have been affecting container and vehicle movements at the Spanish ports over the last couple of weeks have now ended, though threats of further action have been made by the IDC and UGT unions.

The strikes, which began on June 5th, were called in protest about new labour laws that have technically liberalised dock services and ended the mandatory employment of unionised labour. They affected 39 ports around the country.

Days of alternative-hour strikes, which had seen levels of support of up to 97% by stevedores once the strike had begun, were reduced to just below 28% last week, according to information released by port authorities.

However, selective strikes are continuing at terminals operated by those companies that have not signed unilateral agreements with the unions.

In Algeciras, both of the two container terminals are now operating normally, while the vast majority of terminals in the port of Barcelona – including Autoterminal, Setram and Grimaldi – are also back to normal. The situation is the same in Valencia, where the big box terminals are open for business, as are those operating short sea and vehicle traffic, such as VTE, Trasmediterránea and Grimaldi.

In terminals where strikes are continuing, the port authorities are reporting that minimum service levels are being respected and there are no incidents of note.

Operators quit AnescoOne of the main casualties has been the decision taken by terminal operators Alvargonzález, Bergé and Algeposa to quit the stevedoring employers’ association Anesco, taking with them around 42% of its budget. The offer of a general assembly to resolve issues was rejected out of hand by those leaving Anesco, although none of the breakaway companies seems interested in forming a parallel association.

Sources linked to the Bergé Group are quoted in the local press as saying that they have lost confidence in Anesco’s ability to resolve the conflict with the stevedores. Gonzalo Alvargonzález, the managing director of shipping and port services provider, Ership, said that the possibility of finding a unified solution had passed because the trade unions had been appeased.

Alvargonzález, who is also president of the Spanish Ports Investment Body (PIPE), characterised the attitude of the main union, Coordinadora, as being one of “blackmail” in reaching agreements with those companies that are prepared to guarantee the subrogation of the rights of all employees.

“An agreement to which you are forced to adhere is blackmail, not negotiation,” he said.

He was also critical of the role played by government, pointing out that it was difficult to understand how it had been the driving force behind the implementation of the EC legislation but had then done nothing to ensure its compliance.

Nor is Alvargonzález optimistic about the future, believing the stevedoring unions to have adopted a short-term attitude.

“We all know that in some ports there are too many workers and that companies cannot look after all employees," he said. “We don’t want to have precarious levels of employment. We just want to be normal companies.”

While the stevedoring situation in Spanish ports has, at least for the moment, resolved, the International Dockworkers Council (IDC) has called for a two-hour port stoppage across Europe on June 29th from 10.00 to 12.00 in support of Spanish stevedores. The IDC also wants this strike to reinforce its opposition to what it views as the ultra-liberal policies of the European Commission (EC).

The UGT Union has also called for strike action in the first week of July according to Reuters report.