Spanish production and exports on the rise 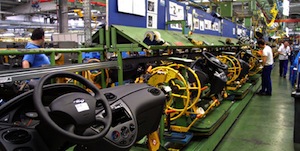 In October Spain's 17 car factories produced almost 211,000 vehicles, including passenger cars and commercial vehicles, an increase of 17% compared to October 2012, according to figures released by the Spanish association of car and truck manufacturers (ANFAC). In the first ten months, total production rose 9.32% to 1.83m units.

ANFAC is confident that the increase will continue. It started in April, when 20.2% more vehicles were built, following a 9% decline in March. Since then, there have been seven months of consecutive production increases, with growth of more than 10% in all months except May. In September production was up 18.8%. Predictions are for a total of 2.2m vehicles built in 2013.

The association identifies a number of factors to explain the production upswing. Improving European economies, such as Germany and to some degree France, are boosting demand, since these are leading importers of Spanish-built cars. A growth in global markets, such as the North America, North Africa and Turkey, has also helped Spanish manufacturers.

Spanish plants are also reaping the benefits of increased investment, which totalled €3.5 billion ($4.8 billion) for the year. Manufacturers have also diversified their market for Spanish-built vehicles.

In 2011, Spanish plants built 34 different models; in 2013, this had risen to 39 and in the next two years this is expected to increase to 45 models, again the result of more investment.

Exports for October also rose, by 11.7%, to 181,463 units, while they were up 9.51% to 1.59m units in the first ten months as a whole, with the main markets being in Germany, France and Italy. Indeed, 87% of total output is exported, while the US, Algerian, Austrian and Turkish markets have all shown significant growth.

Growth of exports to North America
In the US sales of Spanish vehicles has gone from 0 to 18,000 units in fewer then three years. In 2012, for example, Spain exported 4,631 vehicles to the US, a figure that had increased to 17,539 units in the first ten months of this year.

The Ford plant at Almussafes, near Valencia, has had particular success, exporting the Kuga to more than 70 countries, including the US, along with the Ford Transit Connect, which is now approved for use in New York as a taxi. However, the US market accounts for just 1% of total Spanish car exports of 1.93m.

Mexico is another emerging market for Spain, importing 28,057 vehicles in the first ten months of this year, 98% of that figure built by Seat, Volkswagen and PSA. The Turkish market is also up 6.4% to 90,269 units, while Algeria accounted for a further 76,379, which is around 5% of total production.

Figures also show that, in 2012, just 1.97m vehicles were built in Spain, although total production capacity is in the region of 3m, equivalent to just 65% of production capacity being used. Had this continued, then the Spanish automotive industry would have been in serious trouble. The increased output in 2013 has been, in part, due to the flexibility written into many collective bargaining agreements, which has seen temporary working introduced alongside some salary cuts.

Other figures, released by the Economy Ministry, show that the surplus generated by the Spanish automotive industry – being the difference between the worth of exports and those of imports – amounted to €6 billion in the first three quarters. This is an improvement of 18% over the same period in 2012.

Although imports also rose, they did so at a slower rate than exports. Figures show that imported cars were worth €18.558 billion, a rise of 5.5%.