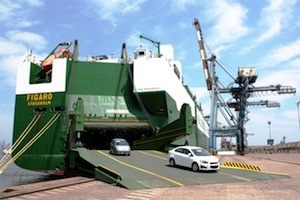 SSA México, a subsidiary of port terminal group Carrix, has finally signed a concession to operate the Terminal Especializada de Automóviles (TEA) car terminal in the Mexican port of Lázaro Cárdenas. The move marks the end of a lengthy legal dispute running since the company was originally awarded the contract in 2012.

SSA México now plans to invest $56m as part of a first phase of development there that will see construction of an initial 80,000 sq.m site begin in early July and operations starting within 18 months.

In terms of infrastructure, SSA México intends initially to build 600 metres of quayside with two berths and a 210,000 sq.m storage area, as well as a number of buildings for value added services. The terminal will also be rail-connected.

SSA México already has a major presence in other Mexican ports, operating cruise, container, finished vehicles and general cargo terminals. It has been operating a multi-purpose terminal at Lázaro Cárdenas since 1995 and began vehicle operations there in 2013. However, the latest concession will expand on this significantly. It has been signed for 30 years and will eventually cover an area of around 420,000 sq.m on Cayacal island.

The facility is initially expected to handle up to 400,000 units annually, with a second phase of development potentially expanding that to 750,000 units. Currently, Lázaro Cárdenas handles around 350,000 units a year but the extra capacity will be needed as car production in Mexico is expected to rise from 3.4m units to 5.3m units by 2020, as five manufacturers start up new operations.

SSA México's existing finished vehicles activities in Mexico include handling around 550,000 units in the ports of Acapulco, Lázaro Cárdenas, Manzanillo and Veracruz. It is shortly to commence further operations in Tuxpan.

… while Amports fights for legal guaranteesFollowing the signing of the SSA México contract, incumbent port operator Amports de México has asked the port authority (API) for some legal guarantees in respect of its own position at Lázaro Cárdenas, to support new investment it wishes to make to raise its operational efficiency there.

Ernesto Ibarra, managing director of Amports de México, has revealed in comments to the press in Mexico that over the last three years API has only offered it a series of 12-month contracts, albeit with the possibility of a further year’s extension. Amports confirmed this with Automotive Logistics. Attempts to secure medium- to long-term contracts have proved fruitless, he said. Indeed, in 2015, contract lengths were cut to just six months, causing uncertainty for the company over future investment and for shipping lines wishing to sign their own contracts.

Compounding these woes, a number of finished vehicle storage areas it developed at a cost of $5m on the Isla del Cayacal are due to become public facilities once its contracts lapse. Following the signing of the new contract for the TEA, API incorporated these areas into the SSA concession, said Amports, leaving it with just an area on the Isla de Enmedio where it can handle cars.

It has now asked API to make 150,000 sq.m of land within the port available, where it plans to invest a further $5m in infrastructure and equipment, including rail connections. To amortise the investment, however, Amports said it would need to be granted a concession of at least five years, renewable for a further five years.

API’s apparent reluctance to agree to this has left Amports wondering if its contract will be extended when it expires.

The firm has suggested Lázaro Cárdenas has enough space to support two competing finished vehicles terminals or more in future. In the meantime, Amports said it had not ruled out making use of the new TEA with SSA acting as stevedore.

Vehicle shipments in and out of Mexico will be part of the discussions at next month's Finished Vehicle Logistics North America conference to be held in Newport Beach, California between 7-9 June