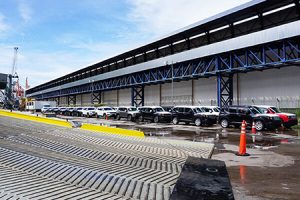 The Brazilian port of Suape, in the state of Pernambuco, has reported a 54% rise in the number of finished vehicles handled in the first two months of 2018. In total, 10,274 units moved across the docks in the period, with February alone accounting for 6,824 units – a month-on-month increase of 78%.

The automotive industry generated 29.5% of all exports from Pernambuco during January and February. Throughput of cars with fewer than six seats rose by 18.2%, with a combined value of $54.3m, while that of diesel vehicles of less than five tonnes, valued at $44.5m, was up 11.3%.

The port’s public terminal for finished vehicles, which covers an area of 18.3 hectares and can accommodate 250,000 units annually, now forms part of the federal government’s Investment Partnership Programme (PPI). The concession, for which the infrastructure is already in place, is part of a brownfield development.

The new concessionaire, which will have to invest an estimated $3m, will be responsible for the entire customs process, but will also have to give certain productivity guarantees as well as expanding the supply of services provided by the terminal. A contract should be signed by the first quarter of 2019.

Manufacturers using Suape to both import and export vehicles include FCA (Jeep and Fiat), Volkswagen, Toyota and GM.