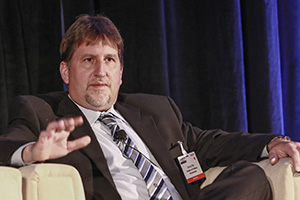 Carmaker Subaru has successfully transitioned to a lean process flow at its production plant in Indiana, in the US, in a major project with third party logistics provider Venture Global Solutions, ahead of the launch of the new Impreza model.

“We needed to be able to change our production methods at any point in time, very quickly. We had to be agile,” Darryl Bol (pictured), section manager material management logistics at Subaru of Indiana Automotive, told delegates at The Supply Chain Conference in Atlanta.

“The ultimate goal of this was to maintain a repeatable flow of parts into the facilities and to be able to address any 'abnormals' that occur in the future.”

Starting in October 2015 and over the course of a year, the company, which has been manufacturing vehicles in Indiana for 30 years, adopted a new transport management system (TMS), implemented lean separation centres (crossdocks), and achieved a reduction in miles, inventory and costs. It did that at the same time that it added a new assembly line, added a new model and roughly doubled production.

“Back in 2015 is where we started. We weren't hooked up with Venture Global yet; we weren't prepared for the optimisation. We were using spreadsheets and maps to set up our routing,” said Bol.

“In 2016 we started to optimise. One of the key optimisations is we went from 850 [vehicles] per day to 1,000 a day. We were also able to start that lean process flow for Subaru.”

The Indiana plant sits on 332 hectares and has 418,000 sq.m of workable space that includes almost 27km of conveyors. It is now capable of producing 450,000 vehicles a year with a second production line added in July last year.

The plant produces the Outback, Legacy, and four and five-door Imprezas . Next year, it will start also making the seven-passenger Ascent SUV.

The plant had previously also built the Toyota Camry, however production was moved last year to Toyota's plant in Georgetown, Kentucky.

Production of the new model Impreza began in October 2016. “We had over 50 new suppliers and were producing 1,600 daily volume at this point and had over 1,000 new parts,” said Bol. “We had a whole new mountain of complexity.”

The plant operates mixed production (producing multiple models on single lines) as well as bridged production (one model on two separate lines). Daily volume is expected to increase further to level off at about 1,800 vehicles a day from next year.

As part of the expansion, the company added a second paint shop alongside the additional capacity for its assembly lines. As a result, a significant portion of warehouse space within the plant was converted to production space.

“We knew from an inventory policy we were going to go from 1.25 days of standard inventory down to 4.5 hours,” says Bol. “We wanted very high-frequency, low-volume inventory coming into our system.”

In April, the company started its new yard management system (YMS) allowing it to track and trace everything inside and outside the yard.

“This digital yard is real-time, it is data-driven, automated and integrated. We use software to eliminate the islands of information,” Bol told delegates at the conference.

The company is also planning on rolling out the use of drones to track inventory in the yard and further afield, he said.