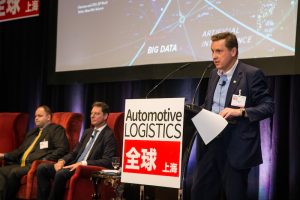 The automotive industry is undergoing a fundamental change in the way it does business. Global supply chains are being tested to the limit by complications in international trade and the switch to new energy vehicles (NEVs).

However, the revolution in logistics digitalisation is equipping carmakers, suppliers and their service providers with the ability to remain agile and stay ahead of the game. At this month’s (April) Automotive Logistics Global Shanghai conference, delegates heard about how they were adjusting their strategies and adopting state-of-the art technology to do so.

In the 1950s the cargo container transformed the logistics industry. Data is the new container and the digital reinvention of the supply chain is facilitating a significant uptick in trade, according to DP World’s CEO and MD of Asia Pacific, Andrew Hoad. That data is being generated by a sensor-rich environment. Referring to a recent World Economic Forum (WEF) report, Hoad said that in a decade from now there are forecast to be a trillion sensors fixed to every product being moved, including parts and vehicles, and the logistics assets moving them. All of these will be feeding data into a connected platform that will allow machines to talk to each other. That level of digitalisation will fundamentally change the way the automotive industry does business, said Hoad.

For DP World’s more than 30 ports around the world, that means fully automated terminals, such as the one in Qiandao. Hoad said that port information networks of some kind had been around for a long time, such as the SPIN network at the port of Southampton, but that digital technology was going to transform international trade into a fully automated process with sensors feeding data to the partners involved.

Hoad went on to say that over the next two years there was going to be a proliferation of sensor technology that would allow the owners of the parts or cargo to get better visibility on their shipments, adding that the IT managing this data would promote greater transparency.

“Ultimately digital means you will be able to move a piece of cargo from China to Europe without the intervention of the hand of man,” said Hoad. “The whole thing will be automated, and that is very powerful because it means you match supply and demand very efficiently. It means you take out cost and seed trust with customers, and the people who are managing the platforms.”

What is crucial is to have a clean process to analyse the “gigantic bird’s nest” of data now being made available and plan with accuracy, according to Ryan Garitty, Ford’s China material export manager.

Garrity acknowledged that there were now thousands of connections that hardly seemed to have a bearing in reality, but he said that Ford was running a number of pilots to better understand the new situation and establish a foundation for the future of its business.

Garrity went on to say that Ford was anticipating a decrease in the daily cadence of manual operations because of digital and automated processes in both manufacturing and logistics, and that the future was going to be more about “exceptions management”. That called for a new strategy in an industry that was no longer as predictable as it used to be, one that would involve a creative role for supply chain managers. What was crucial however, was that those managers ensured that the first generation of data was accurate.

“If the first generation of that data is not good, everything after that is just not going to work,” he said. “We are talking about different levels and states. The first level is how clean is your data and how clean is your process. That is the first step.”

Automating greater productivityJoerg Storm, chief intelligence officer and director of IT service and parts at Daimler Greater China, gave a good example of where automated technology is helping it to achieve greater productivity and savings in the aftermarket. The company has trialled an automated warehouse robot called Bixi, which it has developed with Chinese technology start-up, Water Rock Technology, for use in its parts distribution centres (PDCs).

The automated heavy load carrier is based on a “goods-to-people” concept for robotic technology and is already being used by the likes of Amazon and Alibaba for e-commerce warehousing. Storm said Daimler was the first OEM to use the technology, which has increased productivity and accuracy for picking and bin allocation.

“We can get double the efficiency and productivity compared to the old manual process, and it is extremely easy to set up,” he said. “We implemented very clear guidance signals for our operators, so for example, we reduced the training time for our operatives down from two months to two days. We can dynamically add or remove robots or shelves depending on the business volumes, so it is highly scaleable.”

Storm went on to say that working with a Chinese start-up rather than a global provider had brought mutual benefits, supporting the product maturity of Water Rock Technology and improving the warehousing process.

“During the time we worked together with the start-up, the robot and the whole process has been improved,” he said. “It was absolutely the right decision and our partner was extremely motivated. It helped us to realise our overall IT strategy faster.”

Daimler is also working with start-ups in China on a range of other digital proof-of-concepts, including image recognition for monitoring damage to finished vehicle deliveries using artificial intelligence, real-time route visualisation and strategic warehouse network design. Its WeChat mini program is being used by 1.3m customers and it is also implementing smart glasses and voice interaction at its PDCs. Storm said these too were enabling speed and momentum in the business.

Meanwhile, Ford’s joint venture with Changan Automobile – Changan Ford – is also focusing on robotic automation of systematic work with one of its third-party logistics providers. Balakrishnan Adhi, deputy director, Material Planning and Logistics said the carmaker was building a digital workforce and programming the robots to help with repetitive tasks such as information gathering.

Ford is moving along a trajectory from “bots that do, to bots that think, and eventually to bots that analyse”, according to Adhi. He said that the implementation of the technology in the middle of this year would improve efficiency and standardisation.