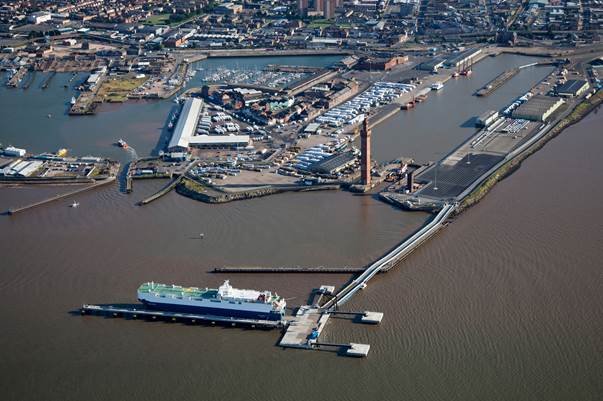 Associated British Ports (ABP) has applied to the Marine Management Organisation for permission to expand its Grimsby River Terminal, on the UK’s eastern coast, in order to handle the world’s largest car carriers.If the plan is approved, the port operator will commit to a multimillion-pound investment to enable the terminal to accept vessels containing almost 9,000 vehicles

[mpu_ad]The application is the first step in a 12-month consultation process to extend berthing infrastructure and deepen the berthing pocket through dredging. The development will take two to four years to deliver, an ABP spokesperson told Automotive Logistics.

The company says the improvements will allowthe terminal to further support the UK’s automotive sector.Currently, Grimsbycan take ships carrying up to 3,000 cars, handling two 175-metrelong vessels simultaneously. The expansion will enable 9,000-vehicle vessels to berth alongside.

According to port manager Ashley Curnow, Grimsby has been “at the forefront”of car transport in the UK for many years. Its river terminal opened in 2013 after a £26m ($34m) investment. Operations are focused on inbound movements, with Grimsby currently handling half of VW’s imports to the UK, according to ABP.

The planned expansion at Grimsby follows Kia Motors’announcement in March that it will create capacity for 8,000 more cars at its UK import and distribution centre in Stallingborough, North Lincolnshire.The company has secured 16.8 hectares of extra land from ABPnear the port of Immingham, adjoining the OEM’s existing distribution centre which can hold up to 17,000 cars.

For further details of vehicle handling activity at the terminals in Europe, see our annual ports survey in the April - June issue of Finished Vehicle Logistics magazine.