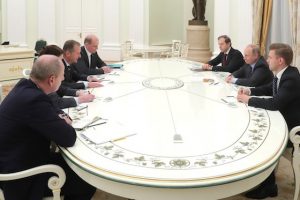 Russian president Vladimir Putin has placated tension between VW Group and the Russian Ministry of Industry and Trade by promising the carmaker a special investment contract (Spic) and access to additional state support if it goes ahead with plans to increase production in the country. The carmaker is ready to invest Rub40 billion ($650m) over the next five years to expand production, enhance localisation and increase export supplies.

VW has already invested $2 billion in production capacities in Russia. In 2018, it manufactured 200,000 finished vehicles there and exported 20,000 of them. At a meeting with Herbert Diess, general director of VW in Moscow on April 12, Putin said the Russian government was grateful for the investments and the increasing localisation, and as a consequence it could count on state support in future.

A few weeks earlier, Marcus Osegowitsch, general director of Volkswagen Group Rus, revealed that there was a dispute on the terms of the contract between the carmaker and the Russia’s Industry and Trade Ministry. The carmaker outlined its investment plans but the Ministry insisted that VW also localise transmission production in Russia. Osegowitsch argued that such an investment, even with the state support offered in return, would not be economically feasible, adding that VW would prefer to keep importing transmissions and gear boxes to the assembly plants in Russia.

Together with GAZHerbert Diess asked Putin to help with the assembly line VW runs at the Gaz Group plant in Nizhny Novgorod. The fact that the plant belongs to Gaz Group, which is owned by Russian billionaire Oleg Deripaska, means it is subject to the threat of US sanctions. Deripaska was as one of seven Russian businessmen and 12 companies targeted by the US in April last year in response to what the US government called “malign activity” by Russia, including involvement in the last US elections. Since then Gaz has faced supply chain disruption because of a parts shortage thought to stem from the sanctions against Gaz.

There is no information what help Diess was asking for exactly but Russian newspaper Kommersant, referring to its own sources, said that VW asked Putin to assist the carmaker in negotiations on avoiding those sanctions.

In earlier statements, VW said that if a Spic with the Russian government was signed, all new investment projects would be implemented at the Kaluga and Nizhny Novgorod plants. Given this, the threat of sanctions against the Gaz Group is of critical importance to VW’s continued investment plans in Russia.

Speaking recently at a press conference, Deripaska said that Gaz may not survive if it stays on the US blacklist. He added that there are currently no talks with US Office of Foreign Assets Control (OFAC) over the terms of lifting the sanctions.

Gaz currently operates with licenses from OFAC that allow other companies, including VW, to keep working with it. However, if the licenses expire as scheduled on July 6, there is a chance that VW could also be subject to sanctions. In this scenario, Deripaska said Gaz could go bankrupt.

Earlier Deripaska successfully convinced the US authorities to lift sanctions from his other businesses, Rusal and En+ Group. However, this doesn’t mean that the negotiations over Gaz Group are certain to be successful. Deripaska said that both Rusal and En+ Group were international companies, while Gaz operates mainly on the Russian market, meaning there is less incentive for the US regulators to lift the sanctions against the carmaker.