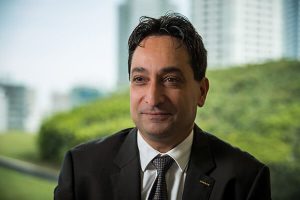 Nissan is looking to develop a components supply chain in Algeria to support the construction of its new car plant in the North African country with local partner Groupe Hasnaoui.

“Using our Japanese engineering expertise, we will build a manufacturing hub and work to develop the supplier industry,” said Peyman Kargar (pictured), senior vice-president and chairman of the Africa, Middle East and India region for the OEM.

The plant is expected to create at least 1,800 jobs and to support many more in the supply chain.

Nissan plans to have teams from Japan working with suppliers in Algeria to develop a local components sector through technical support, training and skills exchange, he said.

Longer term, the company wants to export both vehicles and parts from the country, and to achieve this, it will need to work closely with its supplier base to compete in terms of cost and quality, a company source told Automotive Logistics.

The new assembly plant will be built in Oran, on Algeria’s north-west coast, where Renault has a plant. Nissan will seek synergies with its Alliance partner in working with suppliers and plans to talk more about suppliers in the months to come, the source said.

With the government’s approval already secured, Nissan and Groupe Hasnaoui will set up a joint venture in coming weeks and invest $160m in the new plant. It will have sufficient capacity to build 63,500 passenger cars and light commercial vehicles a year across several models. The first car should be rolling off the assembly line in mid-2020.

Details of the models to be produced there have not yet been announced. “Nissan will bring new models and innovative technology to meet the growing expectations of customers in Algeria,” commented Kargar.

Algeria is forecast to become Africa’s second-largest car market, totalling 350,000 units a year by 2022. However, volumes have fallen in recent years because the government has put quotas on car imports, to support its efforts to create a local automotive industry. That means there is pent-up demand in the country, the Nissan source said.

The government has announced plans to reach a production target of 500,000 cars a year and grow a local supplier base at the same time. Among those contributing to vehicle production in the country will be Volkswagen group company Audi, which recently began assembling vehicles at a plant in Relizane, 280km south of the capital Algiers, run by its long-term Algerian partner, Sovac.

Nissan’s Algerian partner, Groupe Hasnaoui, is a major player in the local economy with interests in industry, distribution and services. It has been the distributor of Nissan vehicles there for 25 years.

Last year, Nissan announced plans to double its presence in Africa, the Middle East and India. The company already has plants in South Africa and Egypt, and is working with a partner to assemble cars in Nigeria. The company has also signed memorandums of understanding with the governments of Ghana and Kenya to develop automotive industries in those countries.

The new plant in Algeria will increase Nissan’s total production capacity in Africa to around 200,000 vehicles a year.