Tesla now in production at Tilburg for European customers 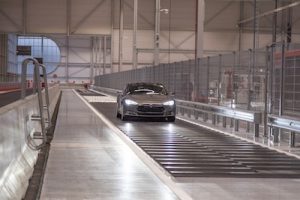 Prestige electric vehicle maker, Tesla, has officially opened its assembly plant at Tilburg in The Netherlands – the first such purpose-built facility in Europe. The factory is supplying the Model S to customers across the continent, and Tesla has said building in Tilburg will increase the speed of deliveries to European customers.

The 77,650 sq.m plant opened on September 25th and will now gradually ramp up to full production, equal to 90 cars a day, or 450 a week. Tesla’s total investment in The Netherlands to date is €50m ($56m), including factory, stores and employees. The company was previously using another building in Tilburg for assembling vehicles but this is now being used as a service centre, according to the company.

“It was a logistics hub which put the cars together before shipping them to the various markets,” a spokesperson for Telsa told Automotive Logistics. “The new facility is much more automated, increases capacity and also allows robust quality control checks that we previously could not complete at Tilburg.”

Tesla is shipping all parts of the Model S from its Fremont plant in California for assembly in Tilburg.

Assembly includes installation of the battery pack, powertrain and rear axle, as well as each vehicle’s first firmware upload. The cars are then quality tested. However, Tesla’s spokesperson said that future expansion at Tilburg is likely to include sub-frame construction too.

Once ready, the vehicles are shipped out to dealers across Europe. All cars are made to order so the schedule depends on both assembly time in Tilburg, and production schedules in Fremont, the company said. Tesla now has 69 stores and service centres across 12 countries in Europe. The vehicles are shipped to the service centres for pre-delivery inspection, and then delivered to customers.

Tesla reported that there are now more than 1,000 free charging stations (Tesla Superchargers) stretching from Norway to Slovenia and from the UK to Spain.

“Using a combination of Superchargers and the newly launched destination charging, Model S customers are able to travel extensively and easily over long distances in Europe,” the company said in a statement.