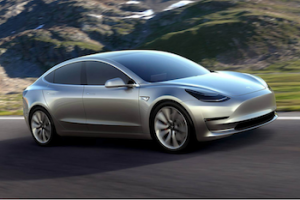 Tesla has warned it may not be able to meet its growing vehicle production plans unless it manages to add manufacturing capacity and bolster its supply chain arrangements.

The admission follows publication of plans to step up production substantially, including building 500,000 units annually by 2018, two years ahead of its original schedule.

In its first quarter report, however, the OEM has issued a warning about several risks associated with the manufacturing and distribution of the Model 3 (pictured).

These include an admission that it has no experience in manufacturing vehicles at the volumes anticipated for the Model 3 (some 400,000 customers have put a deposit down on the new model since it was unveiled at the end of March), and that if the business is to be a success, the OEM will need to develop "efficient, automated, low-cost manufacturing capabilities, processes and supply chains necessary to support such volumes".

It has also revealed that while plans to expand its production facilities at the factory in Fremont, California are underway, its Model 3 component procurement plans have not yet been set in stone. Although it sources parts from hundreds of direct suppliers, for example, the majority of them are single-source suppliers. It has also admitted that it does not have long-term agreements in place with many of them.

"This limited supply chain exposes us to multiple potential sources of delivery failure or component shortages," it admitted in the report.

While supply chain disruption is an obvious risk, any moves to change its supply chain could end up increasing costs, it added. Some of its suppliers have already had difficulty meeting Tesla's requirements or have sought to renegotiate the terms of their supply, it said.