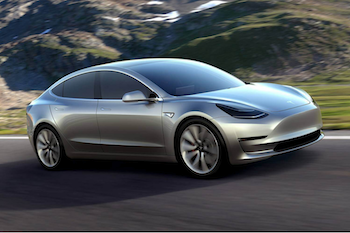 The Tesla Model 3 is finally on order, almost two years after the vehicle was first announced. The mass-market, lower-priced electric car has seen unprecedented demand, reaching 276,000 pre-orders in the first 72 hours.

Customers had to put down a $1,000 (refundable) deposit for the new Model 3. Given that 276,000 pre-orders were placed in 72 hours, that equals $276m in the bank from deposits alone. Of course, not all those 276,000 orders will come to fruition, but planning for an effectively built-to-order model will be difficult.

On the one hand, Tesla seems to have achieved the miraculous ‘Apple effect’, creating mass hysteria around launches and 800-strong queues outside its ‘stores’, but on the other, those consumers tend to want things immediately these days. Tesla isn’t going to be able to deliver its orders for at least a year, but reports suggest some customers could be waiting until 2020; that’s a long time, whether the vehicles are customised to a personal set of standards or not.

There is no doubt that Tesla is changing the automotive industry and changing the way that consumers buy cars – something that OEMs have only dreamed of previously. Although higher in Europe, the percentage of built-to-order models in the US accounts for around 6% of sales. However, since June 2006, OEMs in the US have had 3.8m unsold units sat on lots around the country according to data from Automotive News, which is a lot of wasted money and space. That doesn’t look like it will ever be an issue for Tesla.

Supply chain challengesDespite all the positives, the problems and challenges are obvious, not least for logistics and the supply chain. This could be related to plant locations, quality control, quality holds, supplier issues, premium freight or capacity issues. Tesla has only ever made 100,000 cars in its history and its factories are scaled for considerably lower levels of production. Tesla’s ‘gigafactory’, a 5.5m-sq.ft space in Nevada, which will produce batteries for Tesla’s cars, is set to start production in 2017 (coinciding with the Model 3 launch), but factories producing the cars will either have to significantly step up, or more will need to be built.

On Twitter, Elon Musk replied to a question about European waiting times for the Model 3 and whether a new factory will be needed to meet demand. He said, “We will need to build a factory in Europe to serve long-term regional demand as Fremont reaches max capacity.”

Tesla’s Fremont plant in California is capable of producing 1,000 cars a week, and it also has a specialised production plant in Lathrop, California. In Europe, the company has an assembly facility in Tilburg, the Netherlands, capable of assembling 450 Model S vehicles a week, however all of the parts are imported from its plant in Fremont.

Although Tesla has always done things differently, as production is set to significantly ramp up, the question is whether it will have to become more like a ‘normal’ OEM in regards to logistics and supply chain, or will it continue to change the automotive industry in even more ways? It may be time for smaller OEMs to take note, and eventually, if all goes to plan, the giants of the automotive world too.