The export engine on the peninsula

As South Korean carmakers watch their sales rise across the globe their logistics providers have been adjusting strategy to keep pace. Marcus Williams reports on the diversification and investment being made to meet demand for faster shipping and greater capacity. Additional reporting by Christopher Ludwig

While the majority of carmakers around the world have been clawing sales back from an economic trough that has left a lot of them looking very different this year than they did in 2008, those based in South Korea, primarily the Hyundai-Kia Automotive Group, have been making healthy strides into global markets, led by an almost 70% sales increase in China, and sales figures in the US and Europe that have showed unique gains in otherwise depressed markets. South Korean manufacturing has proven stridently resilient to the recession, and indeed its greater threat may be with unrest north of the border in North Korea, which opened fire on a disputed island in November, and is also accused of sinking a South Korean naval ship earlier in 2010.

The global sales picture has been bright, however, especially for Hyundai-Kia. In the first half of 2010, Kia shipped 990,000 units around the world and pushed global sales growth to just over 49% compared with figures for 2009. The company has reported export as well as domestic sales increasing significantly thanks to the continuous launch of new models. It also recently reported hitting the 1m milestone for exports from South Korea to Latin America, achieved with a shipment of Soul Flex vehicles to Brazil in November. The company is now aggressively targeting the Brazilian market with sales expected at 53,000 for 2010, an increase of around 102% on the previous year.

In last October’s quarterly results, meanwhile, Hyundai sold more than 2.6m units worldwide (including 1.2m in South Korea), a 21% increase from 2009, helped by strong demand in overseas markets. Total exports between May and October in 2010 were just short of 900,000, with North America accounting for more than 195,000 and with exports to Latin America reaching nearly 175,000.

South Korea’s vehicle exports to Eastern Europe rose by 127%, in the first ten months of 2010, compared with the January-October 2009 period. Kia’s vehicle exports there rose 99% year-on-year to 61,000 vehicles, followed by Hyundai, which reached 57,000 units, up 178% from a year earlier–such growth occurring in spite of Kia’s European production in Slovakia and Hyundai in the Czech Republic. 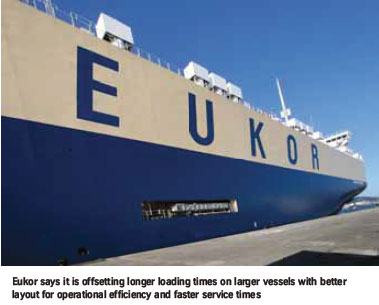 Korea. “With the global economic downturn in 2009, other automotive manufacturers reduced their production and exports,” says Michael Choo, a spokesperson from Kia’s Export Administration Team. “This affected the demand of vessels for vehicle shipments. As a result, this situation turned into an opportunity for Kia as there were more vessels available to carry our vehicles.

“While keeping a close eye on the changing shipping market, we have also conducted regular meetings with our car carriers to astutely prepare for our increased exports,” he adds. This demand meant that last year Kia experienced an increase in exports for vehicles made in Gwangju (including the Soul) and was faced with the challenge of increasing movements to ports in the south or risk losing time and money by moving vehicles across land to the port of Pyeongtaek in the north, which currently handles most exports. Having conducted research in 2009 into how the increase of production at the Gwangju plant would affect logistics, Kia met the challenge from two angles: maximising port capacities and minimising the cost of logistics.

“Our absolute principle was that vehicles must be shipped from the ports nearest to the respective plants,” says Choo. “Hence, in the case of the Gwangju plant, we secured more yards in Mokpo and, to take the advantage of more leased parking area, we redesigned some land transporting maps.” The company switched deliveries from Pyeongtaek port and moved tens of thousands of units that were manufactured in Gwangju to Mokpo, the nearer port, which saved money in reduced inland transport costs. 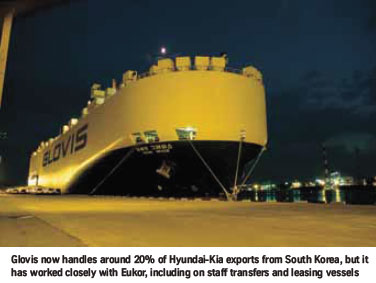 Speed of delivery
But with growth has come the challenge of maintaining fast shipping times. The larger ships built prior to the economic downturn led to longer loading times when volumes dropped. Shipping lines also reduced capacity and added extra calls to their routes. But for finished vehicle movements, the major manufacturers say this has not been a problem.

Kia says the trend for increased ship sizes and the risk of longer loading times hasn’t affected its service and it has dealt with the issue by holding regular meetings with its car carriers. “Sometimes the vessels wait to load more units but usually these are newly built, high-speed vessels so their delivery time would not take longer than expected,” says Choo. “When the shipping company is unable to provide the mother vessel on time, we use feeder services.”

For its part, while Eukor admits there are slightly longer loading times with its newer ships, it has increased operations efficiencies to offset them, including improved internal layout to facilitate stevedoring which also minimises cargo damage. “Also, the new vessels’ high service speed of 20.5 knots+ contributes to faster turnaround,” says Martin Malmfors, head of president’s office for Eukor. “Therefore, despite the introduction of a number of larger, 8,000 capacity class vessels in the main trunk legs, overall transit time has not been noticeably affected.”

Eukor maintains that, with regards to the number of port calls, it is rather more common that lines consolidate ports in the main trade lanes and use transhipment and feeder vessels to smaller destinations to minimise transit time to the main destinations.

Two-basket approach
Glovis, Hyundai-Kia’s logistics subsidiary, is also investing more in deep-sea vessels to ship cars that were previously handled exclusively by Eukor, but which it now shares following a decision last year to start ocean forwarding. Glovis was previously only responsible for moving finished vehicles from production sites to ports where vehicles were handed over to Eukor, but in June 2009 it reported it was planning deep-sea vehicle exports for Hyundai-Kia of 20% in 2010 and up to 50% by 2015.

Last year the company spent $191.5m on orders for three new pure car and truck carriers (PCTCs), on top of the three second-hand vessels it took ownership of in 2009, to meet demand from Hyundai and Kia.

That decision was not surprising to Jan-Eyvin Wang, CEO of Wilhelm Wilhelmsen ASA, which owns 40% of Eukor. Wang was president of Eukor until earlier in 2010. “When you look first at Hyundai-Kia, it is not natural to have a customer of [that] size put all of their eggs in one basket.” he says. “So I think Hyundai-Kia saying that Glovis should do some, with Eukor being the majority provider, is quite normal.

“I think it is good for Eukor to be able to diversify...it allows Hyundai-Kia flexibility and allows Eukor to expand and grow.” Eukor had enjoyed an exclusive contract for 100% of Hyundai exports out of Korea since 2002, something rarely heard of in the industry according to the company, and remains the main carrier with around 80% of volumes, with Glovis servicing the remainder.

“As HMC/Kia export volumes have increased radically over the past decade, Eukor’s volumes, in absolute terms, are still well above what they used to be, despite the 20% of the volumes now being lifted by Glovis,” says Martin Malmfors. For practical and efficiency reasons, the companies have now agreed on a geographic split where Glovis is responsible for the ocean transport to certain regions, such as the Arabian Gulf and South East Asia, while Eukor remains in charge for other trade lanes such as Europe and North America; a portion of Glovis’s vessel tonnage is leased from Eukor. As Eukor and Glovis are indirectly affiliated with each other through 20% cross ownership from HMC/Kia and Wilh.

Wilhelmsen respectively, the company says there are some natural reasons for operational cooperation and peaceful 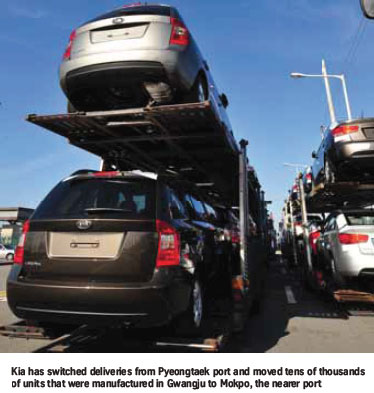 coexistence that it hopes will ultimately create shareholder value. “Eukor has been assisting Glovis in its set up phase, not only through provision of tonnage but also through some staff transfers and general advice on systems and best practices on how to best serve HMC and Kia and ensure utmost satisfaction of our mutual customer,” says Malmfors.

Transit time contracts
For GM Daewoo, which uses WWL and Höegh Autoliners, longer loading times have been a problem for its container service but not for ro-ro thanks to contract agreements. “One of the key performance indicators is ocean transit time,” says Youngmi Lim, from corporate communications at GM Daewoo Auto & Technology Co. “We define the standard ocean transit time and specify those on the contract. The ocean carriers who provide vehicle ro-ro services are bound by the standard transit time mutually agreed and we have the right to issue a claim for any intentional slow steaming.” Similarly Hyundai has not met with any problems and both Eukor and Glovis have been able to deal adequately with the expansion in their shipments, says Ki Hong Shim, a company spokesperson. Neither is faced with using extra feeder services because of its access to ships lying at anchor at Ulsan port. GM Daewoo, which exports 90% of its vehicles from South Korea, with the largest being Chevrolets to the EU, has also managed to maintain regular shipments to its major export countries with direct calls. However, the company has faced challenges with low volume exports to some of its smaller destinations where no direct ocean service lane is available. This has led to longer transit time via transhipment and limited ocean services, something the carmaker says is unavoidable. The company also faces capacity constraints in port storage yards.

“Since each GM Daewoo plant has limited storage yards, the majority of volumes depend on port storage, but this is very limited so we need to secure another storage yard nearby the loading port for the balance of the volume.”

Trade agreements
Developments in South Korea continue to be dominated by the debate over the free trade agreements between its government and those in the US and Europe, although a compromise now appears to have been reached with the US. The agreement was delayed further at the G20 meeting in Seoul in November over disagreement about a refusal to change a provision in the 2007 paper for an immediate end to the 2.5% tariff the US levies on imports of Korean cars. The Korean government has also stipulated a number of customs and regulatory standards that carmakers in the US and the EU say discriminate against foreign competition. Disgruntled carmakers and unions in the US have feared the agreement would guarantee access by South Korean carmakers without reciprocal assurances that they could improve their sales there. Current import volume into South Korea is very small. But in December an initial agreement was reached that would see the US end its tariff on Korean imports within five years, rather than immediately. In return, South Korea will halve its 8% tariff to 4% immediately on US imports, with no timeline for its elimination. The US will retain its 25% duty on truck imports for eight years, while South Korea also said that it would loose restrictions so that vehicles could be imported at US rather than South Korean standards.

Eukor’s Malmfors has said that the company will be monitoring the developments carefully as they will impact on volume. “We are keen to achieve as reliable forecasting as possible so that we can make as well-informed strategic decisions on the future as possible."