Mexico’s domestic market has been stagnant and yet it is complex, including a high number of used sales and dealer-owned truck hauliers. This is the second part of our outbound focus on Mexico 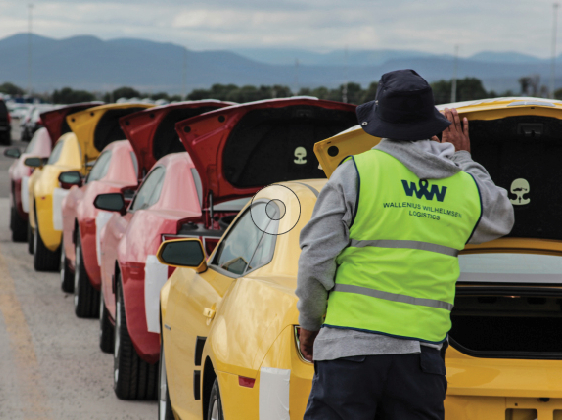 While Mexican vehicle production is expected to grow faster than the BRIC markets, one thing it doesn’t share with those countries is huge domestic sales. Although it has a population of over 120m people and a car penetration rate lower than that of Brazil, for example, Mexican new vehicle sales have stagnated around 1m units per year since 2001.

Some of the factors that have helped Mexico attract OEM investment away from China are also those holding back Mexicans from buying their products, including stagnant wages. The country has also experienced relatively sluggish economic growth and still has very high poverty levels.

Another reason for low sales is that Mexico faces an annual flood of used vehicles from the US. Despite an import tax for used cars, more than 644,000 such vehicles were imported to Mexico last year, according to the Mexican carmaker’s association, AMIA. Even as sales of new vehicles have declined slightly this year compared to 2013, used sales have risen. Currently Mexico can import cars that are 5-10 years old, but there are considerations for lowering this gradually to just one year within NAFTA, which is likely to hold back new sales further, at least during adjustment periods.

"The difference with Nissan to OEMs with dealer-affiliated carriers is that it works with us to control logistics at every point. Nissan is also involved in allowing what accessories are added on the cars"
- Sergio Gutierrez, WWL Mexico

WWL Mexico’s Sergio Gutierrez says the increasing introduction of used American vehicles stunts Mexico’s domestic market. Furthermore, used imports tend not to represent much opportunity for railways or shipping lines, since many are moved by individuals or by auction houses. There are also potential taxes and fees associated with moving the vehicles that would make mass movements ineffective. “Many dealerships in Mexico import the cars individually from the US for customers as a service,” he says. 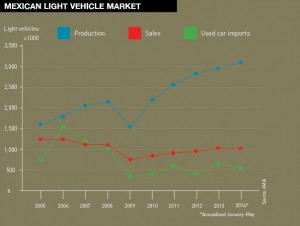 Despite these issues, Mexico’s market is fairly dynamic. Although the government's 'Automotive Decree' provides import duty exemptions for those that produce vehicles locally, the target is low at 50,000 vehicles. An attempt to increase the level to 100,000 has been blocked by Toyota, while both Toyota and Honda received exemptions when they failed to reach the 50,000-unit target in 2009. Otherwise, since the late 1980s and especially since the implementation of NAFTA, the Mexican market has been open, competitive and relatively unburdened by regulation and taxes in the way Brazil is, for example. Mexico imports more than 500,000 new vehicles per year, not only from the US, but also Europe, Korea, India and Latin America. European brands are present here that are rarely found north of the Rio Grande, including Peugeot, Renault, Dacia and Seat. Fiat was also here even before the Chrysler merger helped bring the marque back to the rest of North America.

Nissan is the market leader in Mexico, with a share that has been consistently around 25% (see tables). According to Nissans’ Sofia Garcia, the country is not just a standout for the carmaker in terms of volumes – its plant and operations have become a global benchmark for the carmaker. Logistics operations for Nissan in Mexico are “very competitive”, she says, 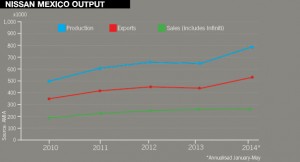 including its domestic distribution and trucking.

Unlike in inbound logistics, where Nissan works with very few third party logistics providers and manages most of its freight movements in-house, for outbound logistics Nissan outsources a large share of its transport management, labour for yard activities and post-production work to WWL across North America. It is a relationship that goes back to WWL’s acquisition of the processing and distribution arm of Nissan, DAS, nearly a decade ago.

How to deal with the danger and the darkness

In Mexico, security of cargo is a particular issue, both in perception and reality. The horrors of its drug war have spooked many foreigners, even if it is less present in many parts of the country. Cargo theft and damage incidents do tend to be higher, however. Honda had an issue with vandalism on the first shipment of vehicles by rail from Celaya. Other executives have reported incidents in which there were people inside trains with guns who stole cargo and vehicles. 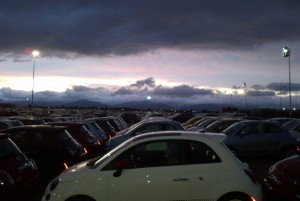 A number of measures have been built into the vehicle logistics process to limit incidents. Trains have increased velocity and avoided stops wherever possible, as it is during points of rest that vandals have tended to board trains, says Nissan’s Sofia Garcia.

Alberto Sanchez, from Ferromex, admits that theft and vandalism are a reality for logistics providers in Mexico, which requires the necessary resources and partnership with authorities to deal with. Ferromex has designed special locks for wagons that are only used in Mexico, for example.

“We also have 2,200 guards and deploy them in the most unsafe places,” he says.

Carmakers take other measures as well; many plant yards do not operate at night to avoid surprises. Contracts with carriers also tend to mandate specific routes, says Garcia. There are authorised places to stop, eat, rest or use the bathroom. If a driver follows these rules, insurance policies will at least cover most incidents that may occur. If he doesn’t, then carriers are responsible for damaged or missing cargo.

“Most of our carriers also have tracking systems to know where the truck stops and what the driver is doing,” she says. “If he stops in the wrong place, he will be punished.”

Mercedes Figueroa says Fiat Chrysler was having issues with vehicle vandalism at Cuautitlan, near Mexico City, and Irapuato, just west of Celaya. “At the Cuautitlan site, we established CCTV, while in Irapuato we worked with the federal police to establish patrol of our trucks,” she says. “With those measures, security increased significantly.”

Garcia says that Nissan has also seen a drop in incidents since it began targeting specific areas. What’s important, she says, is to work with logistics partners and local authorities. “Our incidents decreased a lot as we worked together with carriers and rail companies to design a strategy.”

Despite the competitiveness and complexity in the market, Mexico’s smaller scale, along with capacity geared entirely for exports, puts some limits on its domestic distribution model. For example, it is rare to use rail for domestic transport, except for return flows from the US or ports. With few exceptions, local distribution is thus 100% by truck and in many ways less efficient than its export services.

“In general the cost of trucking in Mexico is very competitive in the domestic and export market, although of course, our best performance comes in rail,’ says Nissan Mexicana’s Daniel Saenzpardo.

There are a reasonable number of car hauliers in Mexico, however a few large ones control the market. One quite unique feature in Mexico is that GM, Chrysler and Ford dealer associations have historically owned several of the largest hauliers. While these carriers can contract with other OEMs, they work principally for the brand: TYT for GM; Tracomex for Chrysler; and for Ford, CSI. The latter, however, has opened up to a more private investment model; this past June, for example, NYK Logistics took a 30% stake in the carrier, which also has yard operations.

For these carriers, the dealer groups largely pull the demand, which means that they control routing and distribution once the carrier takes control of a vehicle from a plant yard or distribution centre. Nissan, on the other hand, has no affiliated trucking company and instead works mostly with the largest private hauliers, including Transportes Cuauhtémoc, Inter MG and Transtec.

“The difference with Nissan to other OEMs in Mexico with dealer-affiliated carriers is that it works with us to control logistics at every point,” Gutierrez says. “Nissan is also involved in allowing what accessories are added on the cars, while for other OEMs their dealers may decide that – in which case they deal directly with us or another third party to install them rather than the OEM’s management.”

The issues for haulaway trucking are not terribly different to other aspects of Mexican logistics: though domestic sales are not growing much, more trucks are needed to move vehicles to and from rail ramps and ports. While truck is unlikely to ever be a mass method of crossing the border, rail capacity issues could increase long-haul moves to staging areas, but already there are shortages of trucks. “We have to make sure that carriers are investing in growth and making plans to deal with increases – and not only from Nissan, but across the sector,” says Chris Styles, from Nissan North America.

Others, including Gutierrez, have called for rail services to expand to include domestic market distribution.

Nissan launched its new Aguascalientes plant with a quick turnaround – just 18 months between the announcement and starting production. Garcia admits that it was a challenge to expand carrier operations for inbound and outbound logistics. Every provider needed to be certified for quality and their finances, to make sure that they would be able to handle the increase in volumes. “Those carriers that told us they couldn’t grow with us had to be weeded out,” she says.

"We have to make sure that carriers are investing in growth and making plans to deal with increases – and not only from Nissan, but across the sector"
- Chris Styles, Nissan North America

The landscape of Mexico’s domestic vehicle logistics market may well change. Already growth is opening up opportunities for local and international players. CSI, for example, is now running Honda’s new yard in Celaya, while it also manages a yard at Veracruz where the carmaker ships exports.

Amports, which has had Mexican operations for several years at Altamira, Veracruz and Toluca, has recently gained Mazda’s yard in Salamanca. Plant yard operations are unique to the company in Mexico, as it has not entered this area of operations in the US.

Other new players could move more forcefully onto the market. Gefco is now in Mexico and its chief executive, Luc Nadal, says it could be a region in which to consider acquisitions. Jack Cooper, the largest haulier in North America, gained Mexican operations with its acquisition of Allied last year, including yard management for Honda’s other Mexican plant in Guadalajara. The company has more trucks in its US and Canadian fleet than there are car transporters across all of Mexico.

At the recent FVL North America conference, Jack Cooper chairman Mike Riggs spoke of the potential to expand further in Mexico, wondering how quickly OEMs would make their decisions for the coming years growth. Sergio Gutierrez suggests such an entrant could be interesting for Mexico. “But the time to act is absolutely now,” he warns.