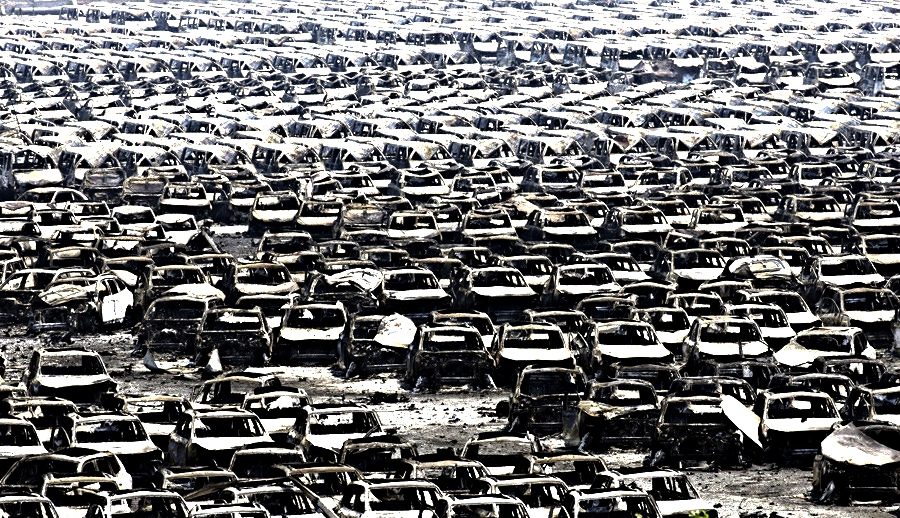 Two huge explosions in the port of Tianjin, near Beijing, have caused devastation to large areas of the city, killed at least 114 people, and left many hundreds injured. Several thousand imported cars stored in a logistics park have also been completely destroyed or burned in the blasts.

Reports say that around 10,000 vehicles were destroyed, including more than 4,000 Hyundai and Kia vehicles, 3,000 Jeep Grand Cherokees (half the monthly Jeep sales in China), 2,700 Volkswagens, 1,500 Renaults (worth an estimated $33 million), 600 Mitsubishis, 100 Subarus, and 50 Mazdas. Sources say that Audi, Mercedes-Benz, Landrover, and Jaguar have also had vehicles destroyed. Some OEMs can’t yet access their vehicles to determine how many have been damaged, so the figure is likely to rise still.

The massive blasts –  which were so large that they could be seen from space – apparently came from a warehouse at the port owned by Tianjin Dongliang Port Rulhai International Logistics, which was used to store chemical and dangerous goods.

A large number of the vehicles were located within a 500 metre radius of the blast. Volkswagen has confirmed that around 2,700 of its vehicles were damaged. While the Tianjin port is out of service and damaged vehicles are assessed, Volkswagen will make deliveries via ports in Shanghai and Guangzhou. Other OEMs are reportedly doing the same, and have started alternative route scheduling for vehicle shipments. It is expected to take a couple of months before the port’s operations are back to normal.

“At this time, we have already begun evaluating the state of our vehicles in all storage facilities at the Port of Tianjin,” Volkswagen said in a statement reported in Automotive News. “Under no circumstances will any cars damaged in this terrible accident make it to market.”

An official statement from the OEM said that they have started estimating the losses caused by the explosions. The automaker also indicates that they are deeply concerned for the safety of their people on the explosion site, much more than the financial loss.

BMW has two distribution centres near the explosion site, but has said it can’t currently say how many of its vehicles have been damaged as there is still a 3km blast zone cordoned off. The OEM has switched to Shanghai to import vehicles into China. It would usually import around 2,000 vehicles a week to Tianjin. Renault has said that its car deliveries in China may fall for this month and September after 1,500 of its imported cars have been destroyed.

Chrysler has said that their loss cannot be determined yet as they cannot enter the site, but has given assurance that damaged cars will not go to market. The destroyed vehicles were part of Chrysler's inventory, so the cars were not set to be immediately delivered to customers. Chrysler has said that the OEM will have new stock in place as quickly as possible though, to meet China’s market demands.

Although the port has remained partially open, movement in and out of the port has slowed down, and this is likely to affect a number of industries, including automotive.

Toyota has announced it is halting production for three days at two of its Chinese plants in Tianjin – Tianjin FAW Toyota Motor Co Ltd – as a result of the blast, in which 50 of its employees were injured. Toyota produces the Corolla, Vios, Crown Royal and Reiz sedans at the two plants. The blast impact has directly affected the Corolla and Vios sedans, but IHS said that the Crown Royal and Reiz models are also likely to be affected. Toyota produced a total of 432,340 units at the twin plants last year. Mark Fulthorpe, director, IHS Automotive light-vehicle production forecast said, “The estimated loss across the three lines would be 2,200 units per day.”

In the blasts, Toyota reported some damage to its research-and-development facility, and to two dealer shops. Toyota spokesperson Aaron Flowles said that some Toyota vehicles had been burnt, but didn’t specify how badly.

US tractor and agricultural machinery manufacturer, John Deere, has also suspended its operations near Tianjin indefinitely, after some of its employees were injured and buildings collapsed. A Mazda dealership near the explosion site also closed temporarily on the day of August 13th after the explosion.

Tianjin Port is a large and important industrial port and one of China’s largest ro-ro ports. In 2014, the port handled 580,000 new vehicle imports and exports, as well as nearly 400,000 vehicles in domestic sea trade.

Tianjin is a key hub in China with shipping connections to much of Asia, good road and rail links to Beijing, and to the rest of northern China. It has two ro-ro terminals. Tianjin port is used for exports and imports, and accounts for the largest share of imported vehicles of any port in the country (40%). Lin Huaibin, manager, IHS Automotive China light-vehicle sales forecast said, "The blast might impact 30,000-60,000 imports of 1m total car imports for this year.”

WWL opened a vehicle processing centre at the port back in March. At the time the company said that Tianjin Port is the highest-grade artificial port in the world, and the main hub connecting northeast Asia with central and west Africa. It enjoys trade relations with more than 500 ports in more than 180 countries and regions, serving 14 provinces, municipalities and autonomous regions that cover 52% of China’s vast territory.