Threat to EU deal with Ukraine could affect imports 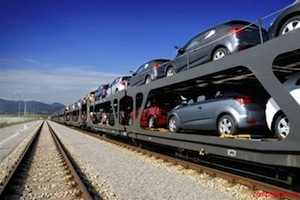 European carmakers will be hoping that political tensions in Ukraine don't jeopardise the proposed trade deal between that country and the European Union, which promises to all but remove duties on vehicle imports to the country as well as get rid of the controversial utilisation fee. The deal was to have been signed last Friday but Ukraine withdrew and has postponed a final decision on the matter until next summer. Ukranian carmakers, meanwhile, are fearful of a crisis for domestic production should they be forced to compete with European rivals, with one stating that they would need support in the form of subsidies following any eventual signing.

The signing of a free trade zone agreement between the European Union and Ukraine promises to significantly improve logistics for European car manufacturers operating in the country, with the prospect of reducing costs by up to 25% by 2025, according to market experts. The current version of the agreement indicates that during the 10-year transition period Ukraine would be required to cancel almost all import duties on vehicles going to the country.

The pact with the EU would have been signed at a summit in Vilnius on November 29, but the government of Ukraine withdrew and has postponed a final decision on the matter until the summer of 2014 when tripartite negotiations with representatives of the EU and the Russian government are scheduled to take place.

The delays to closer union with the EU have raised tension in the country, with mass protests breaking out into violence over the weekend as demonstrators interpreted the move as a perceived distancing of President Viktor Yanukovych's government from the agreement. But away from the political tensions, aspects of the trade deal affecting customs bodes well for Europe's carmakers but is causing concern for local producers.

Customs duty reductions
According to the general director of the Association of Automobile Importers of Ukraine, Oleg Nazarenko, under the current version of the document, the customs duties on passenger cars from Europe will begin to decline a year after the ratification of the agreement, by 1% annually. Currently the customs duty levied on middle-range foreign cars with a 3-litre engine capacity of 10%. The protective duty of 6%-15% imposed this year, that is adding to the basic duty, will also be cancelled during the transition period.

"The agreement provides that in the first year after the creation of the free trade zone the import duties on European cars in Ukraine will not decrease. Then every year it will decrease by only 1% from the current 10%," said Nazarenko.

At the same time, Ukraine’s government has retained the right to limit this process if the influx of imported cars from the EU grows into large-scale volumes.

"If the volume of imports from the EU exceeds 45,000 vehicles, Ukraine has the right to impose special duties. And they will act for another five years even after the 10-year transition period," stated Nazarenko.

Utilisation fee to be cancelled
In parallel, the signing of a free trade zone agreement with the EU will also contribute to the abolition of the controversial utilisation fee that all importers currently have to pay.

The European Integration officer for the Ukraine, Valeriy Piatnitski, Ukraine will allow automobile importers to open their own recycling centres that can theoretically exempt them from paying environmental taxes.

Ukrainian automakers say that improving the cost of logistics for importers could threaten the local market.

"The automotive industry of Ukraine may be in crisis after the conclusion of the Association Agreement with the European Union, as it is not able to compete with other automobile giants of European states," stated Tariel Vasadze, owner of AvtoZAZ. He said that the Ukrainian carmakers will need a substantial support in the form of subsidies, following the signing of the agreement.