Of all major automotive markets, the most significant sales growth over the next three years may well be in North America.

Although we should not forget that even double-digit increases in car sales here would still only mean recovering to pre-crisis levels by 2012, the indicators are reasonably positive nonetheless. While Greece’s escalating debt crisis has rattled European markets and hurt the Euro, and GDP growth in major European economies like Germany and UK are nearly flat, the US economy grew at an annualised rate of 5.7% in the fourth quarter of 2009. Despite an impact in February from the Toyota recall crisis and weeks of blizzard weather, sales still rose 10% and analysts expect recovery to be about 11.5m passenger cars this year, and nearly 14m cars in North America.

According to JD Power, 2011 will be even better, with nearly 17% sales growth in North America, although it does not forecast the US market moving back ahead of China as the world’s largest car market by 2013.

The US still has plenty of production capacity, while a generally weak dollar and union concessions have made local manufacturing more competitive. Kia’s first US plant in the southern state of Georgia started production in late 2009, while VW is building a plant in Tennessee. Daimler has announced that it will shift all North American-bound C-class production to Alabama. 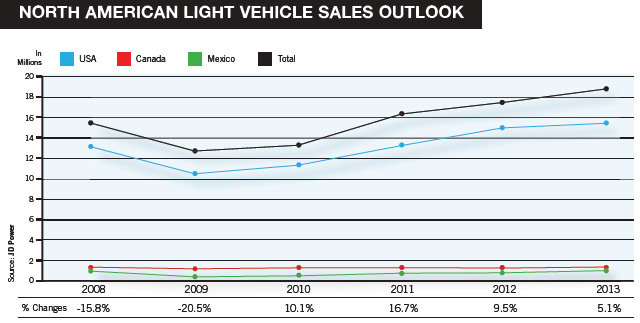 But the good news for shipping lines and ports is that despite these local increases, the US recovery should benefit imports as well. According to figures from IHS Global Insight (see chart on page 6), imports from outside North America to the US, Canada and Mexico dropped 20% to nearly 3.4m units in 2009. But Global Insight forecasts that these imports will increase by more than 16% year on year for the next two years, to 3.94m this year and 4.61m in 2011. 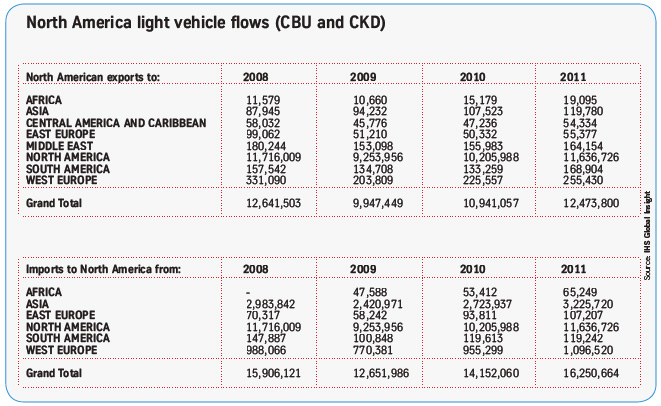 The biggest winners, at least in the short term, appear to be the traditional exporting markets, with imports from Western Europe forecasted by 2011 to recover to nearly 1.1m units (up 42% from 2009) and Asia (including Japan and Korea) to 3.2m units (up 33% from 2009). Neither China, which sent only 2,000 vehicles to North America in 2009, nor India are expected to play a major role in the short- to medium term. On the other hand, the proportion of production forecasted for export beyond the North American continent should remain more stable. Intercontinental exports fell from 900,000 to 700,000 passenger cars in 2009, and Global Insight forecasts they will remain at that level in 2010 even as overall output rises in North America.

A year of hope for vehicle logistics?
Sales projections for the coming year and beyond look reasonably assuring, according to the latest sales forecast data from JD Power. While Europe in 2010, and Japan over the next few years are perhaps the biggest soft spots, returning strength in North America as well as the continued ascendancy of China and Asia Pacific more than compensate on a global scale. Forecasts may ultimately raise more questions than answers, particularly whether China can remain its sales momentum as the government withdraws stimulus, or whether political stability won’t be an issue for markets from Mexico to Iran, or government debt in the developed world. 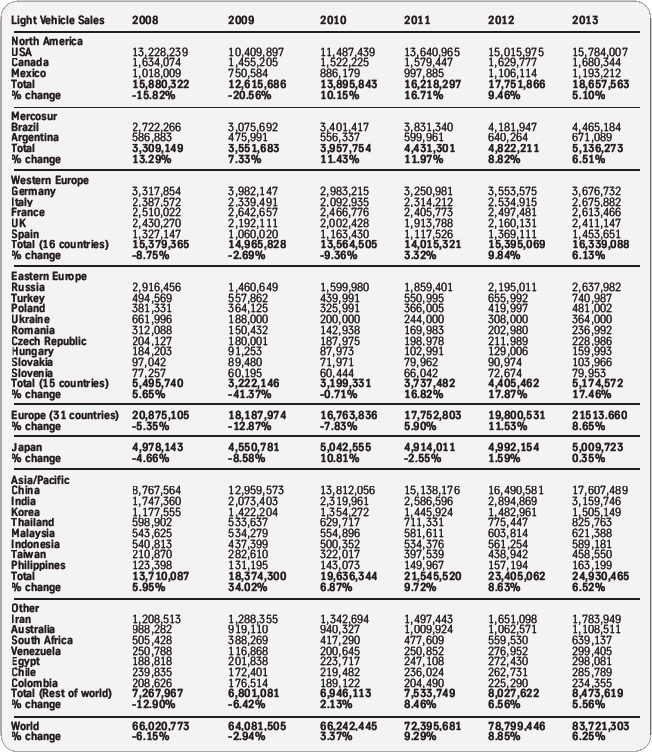 But LSPs are unlikely to be burned again by over optimistic forecasts, and need no warning over cautious planning.