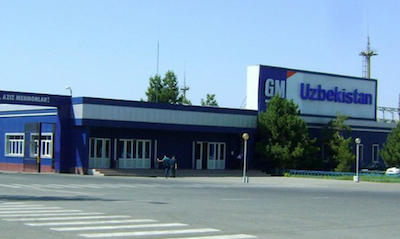 Tokhirjon Jalilov, the chief executive officer of GM-Uzbekistan, has been arrested along with nine other executives at the joint venture company, after an investigation by Uzbekistan’s General Prosecutor’s Office (GPO) alleging fraud in relation to the export of vehicles to Russia via Kazakhstan.

National security services made the arrests on April 29th.

GM-Uzbekistan is a joint venture between the state-run Uz-Avtosanoat (75%) and General Motors (25%), which makes a range of Chevrolet models at its facility in Asaka, including the Malibu, Captiva and Spark.

The GPO said that according to papers in its possession, GM-Uzbekistan was assembling 250,000 cars a year with a significant number of them being exported to Russia via Kazakhstan, and that the company had been receiving money from GM, as well as some tax breaks from the state, to do so. For some time, however, no exports appeared to have been made, or at least none that tallied with declared volumes, it alleged.

Instead, said a spokesperson for the GPO, it had evidence that cars were actually being delivered to a number of warehouses at the Kazakhstan city of Shymkent before being returned to Uzbekistan for sale there.

So far, 10,000 vehicles have been discovered at a warehouse in Shymkent. It is believed the alleged fraud may have been worth around $200m, though this figure has not yet been confirmed.

It is not clear which transport provider was involved in the transport of cars to and from Shymkent or how the vehicles were able to pass back and forth through the customs process at the border without query.

Further allegationsIt is also alleged that vehicles ultimately returned to Uzbekistan would have been sold for around $18,000 there – considerably more than the $6,400 apiece they would have fetched in the Russian market – and that the additional revenue from such sales has not been accounted for.

Vehicle prices in Uzbekistan are much greater than in Russia as GM-Uzbekistan dominates the market there with a share of around 95%, prohibitively high customs duties effectively blocking any vehicle imports into the country.

The investigation into the matter was launched after Uzbek president Islam Karimov visited Russia in March 2016 and heard from local authorities that no vehicle supplies were arriving in the country.

A source at the GM plant in Uzbekistan said that following the investigation by the national security services, the facility had been subjected to a large-scale tax inspection and that manufacturing of vehicles there was now virtually at a standstill.

A spokesman for GM, meanwhile, said that it was “firmly committed to the highest standards of compliance, transparency and integrity in [its] business operations, including its joint ventures.”

Several days prior to his arrest, Tokirjon Jalilov said the joint venture would be investing up to $104m to localise production of the Aveo over the next few years.

It seems likely that some cars, at least, would have been exported to Russia as intended. GM-Uzbekistan has suggested it exported nearly 30,000 vehicles to Russia in 2014 and export supplies of cars to Russia would have become especially important following the closure of GM’s plant in St Petersburg in 2014.