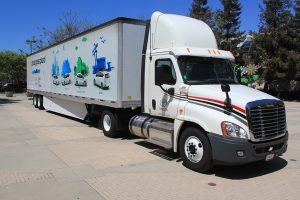 Toyota is using its in-house truck fleet for service parts distribution as a competitive advantage, while also trialling innovations including a new smartphone app for drivers

Toyota is fairly unique in having its own in-house fleet of trucks for parts distribution. Toyota Quality Parts Express serves major routes out of the carmaker’s main parts centres, as well as from a number of PDCs, including Los Angeles. While management and ownership of TQPE are relatively asset-light – its 80-plus trucks are leased and a third party employs drivers – the fleet nevertheless gives Toyota added control and flexibility in the market.

“We use our in-house fleet where we believe we can maintain customer service levels better than outsourcing,” says head of North American Parts Operations (NAPO) Neil Swartz. “We also use it as a benchmark to compare other transport companies.”

“Especially during this period of driver shortages and hours of service changes, it does give us a more stable pool of drivers,” says Mamie Warrick, corporate manager at NAPO.

[sam_ad id=6 codes='true']TPQE allows NAPO to trial new technologies and processes. For example, drivers from the Los Angeles distribution centre now use iPod Touch hardware with a new software app to help record deliveries. According to Mike Schober, corporate manager, the app is programmed with the set delivery route for the driver. When they arrive at dealers – to which they usually deliver unattended, at night – they use the iPod to take a photo or video to record the delivery, which is automatically time-stamped and downloaded each night. This record is particularly helpful should dealers not scan or label their inventory properly, and lose track of the delivery. Further enhancements are in the works for this information to be uploaded into the cloud.

“It means the delivery is recorded, and if in the future there is any question from the dealer about the delivery, we can show them exactly where the material was stored,” says Schober.

“The app has been a big success with TPQE drivers and we’re looking at rolling it out elsewhere,” he adds.