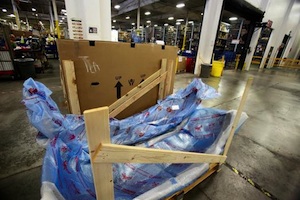 Toyota has released figures to show the success of a waste reduction initiative at its North American Parts Operation that has been recycling old vehicle bumper covers and other scrap parts.

Working with Boles Parts Supply (BPS), the company has been shredding the used parts into plastic pellets that are then be sold on for reuse in the manufacture of new plastic automotive parts. BPS is a leading supplier to the automotive remanufacturing industry.

The recycling programme was piloted at Toyota’s two largest parts centres at Ontario, California and Hebron, Kentucky. According to Toyota, in the first 15 months the pilot programme helped recycle over 40,000lbs of cloth and foam, two materials previously burned or sent to landfills.

Since the pilot programme Toyota expanded the initiative to parts distribution centres in Cincinnati, Los Angeles, San Francisco and Portland. That expansion has more than doubled the amount of cloth, foam, glass and rubber recycled, equivalent to more than 88,000lbs pounds. The carmaker said it is currently reviewing the programme for potential roll-out to remaining parts distribution centres by the end of fiscal year 2017.

“We’ve been enormously pleased with the success of this programme,” said Juliana Dee, manager of the program at NAPO. “Thanks to our partner BPS, we are giving a second life to things that used to be trash and making a real improvement in our recycling rate.”