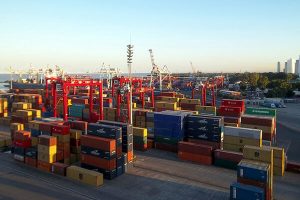 The port of Buenos Aires in Argentina has received its first ever roadtrain delivery of containers from the Toyota plant at Zárate.

The delivery was part of a trial intended to demonstrate the benefits of such roadtrains, and involved a single tractive unit hauling two semi-trailers on a shared axle train. Referred to there as bitren haulage, the approach is more efficient in both logistics and energy terms, as such combinations can carry up to 75% more payload than a standard articulated combination.

“The incorporation of the bitren service in our terminals aims to generate greater savings and reduce the time of operations,” said Gonzalo Mórtola, port administrator. “This is a big step towards intermodality and the modernisation of the whole system.”

The Ministry of Transport only approved the use of bitren haulage on January 8, after which the port upgraded its support area to accommodate the larger units. The port expects to be able to offer more flexible operations, reduce logistics costs and improve energy efficiency as as result.

The two containers on the first service were dropped off at the support area, with the double-articulated unit then returning to the Toyota car plant. Current units can haul two 20-foot equivalent units (TEUs), although the expectation is that this will eventually increase to two 40-foot boxes. The port suggests that logistics costs per tonne should drop by around 30%, based on a 60-tonne load.

Significantly, in January, Mórtola revealed that the port had undertaken a railway trial, connecting port terminals with the same Toyota plant.

“This intermodal advance will make it possible to cut costs and for rail to transport more containers to our country’s industries,” he noted at the time.