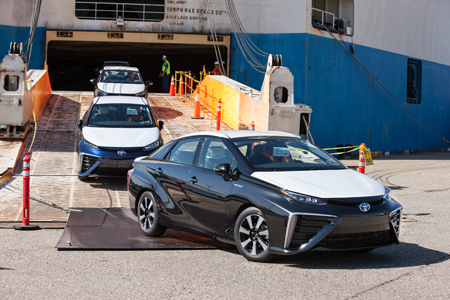 In launching its new, hydrogen fuel cell vehicle, the Mirai (left), Toyota had to work carefully with a number of chemical organisations, right through to the United Nations, to make sure the vehicles could be shipped in the most efficient way possible.

In the push for alterative fuel vehicles, whether plug-in hybrid, electric or fuel cells, there are many hurdles facing manufacturers, including consumer doubts over driving range, a lack of fuel accessibility, and limited economies of scale.

One barrier we may not often associate with the rollout of these vehicles is delivery and logistics itself. However, for Toyota’s new hydrogen fuel cell vehicle, the Mirai – which is on sale now in Japan, and to be followed by the US and Europe later this year – shipping was actually on the verge of being yet another stumbling block on the way to a much-anticipated launch.

A lack of regulatory clarity had been preventing the car’s earlier versions and prototypes from moving on ro-ro vessels because of legal confusion over whether such vehicles could be transported with their tanks full of the compressed hydrogen that powers them. The result was that Toyota, along with other carmakers including Honda and Hyundai that are working on fuel cell vehicles, had to move the cars in containers, as well as take a number of other steps that made delivery slow and cumbersome.

Toyota’s journey developing and selling hydrogen fuel cell vehicles has already been decades in the making, and could, by its own admission, take decades more before they gain mass use or acceptance. Among the familiar issues are a lack of refuelling infrastructure, along with a high price tag and public concerns regarding the safety of hydrogen-powered vehicles.

Compared to all of that, sorting out the vehicle’s logistics has taken mercifully less time. However, it has nevertheless been a complicated process, requiring collaboration across the automotive, chemical and shipping sectors. Clarifying the regulations for shipping such vehicles is not only a boost for efficiency, but also plays a role, however small, in moving towards a wider acceptance and normalisation of such vehicles.

The logistics issue can be traced back to 2012, when the International Maritime Organisation (IMO), a division of the United Nations (UN), added new guidance on shipping fuel cell vehicles to international shipping regulations. Although the guidelines did not specifically restrict hydrogen levels in tanks within vehicles being shipped, a lack of clarity led shipping lines to require that all hydrogen was emptied from tanks before a car was put on a vessel. 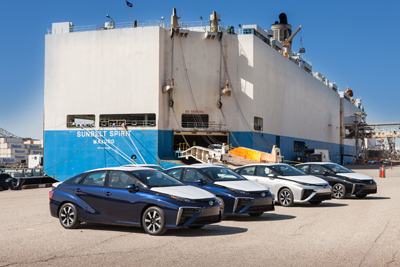 “The carriers didn’t have a good understanding of what the new regulations were saying,” says Nikki Gilmore, hazardous material and chemical manager and sustainability manager at Toyota Motor Sales USA (TMS). “Simply put, it was confusing, as there is the basic regulation around vehicles, and then several different regulations depending on the type of vessel you are using.

“There are also a lot of ‘and/or and also’, so digging into the rules was difficult, especially since we wanted to ship the vehicles on ro-ro vessels,” she adds.

As a result of the confusion, ro-ro lines wouldn’t take the risk of moving such vehicles, thus requiring them to be moved by container. For a previous SUV-based model, and earlier versions of the Mirai, Toyota had to empty the hydrogen and replace it with nitrogen or helium, which meant that the vehicles couldn’t move. They would then have to be pushed into containers. As no US port has yet to install a hydrogen filling station, containers that arrived had to be delivered to destinations and then pulled out manually before being refuelled. In practice, Toyota shunted the containers from the port of Long Beach in California to its nearby headquarters in Torrance, where it has installed a fuelling station.

Up to the launch of the Mirai, this process was more an annoyance than a major hindrance. There were only a limited number of previous test models, and Toyota shipped fewer than 150 hydrogen-powered vehicles from Japan to the US (plus some that were shipped back as well), according to Jackie Birdsall, an engineer in the fuel cell vehicle group at the Toyota Technical Centre, the research and development arm of Toyota Engineering and Manufacturing North America (TEMA).

However, while early volume plans for the Mirai are modest – the US will receive a few hundred out of the 700 produced in Japan in 2015 – the numbers will start to ramp up. By the end of 2017, Toyota expects around 3,000 Mirai in the US alone, according to Jana Hartline, environmental communications manager at TMS. At this level, Toyota has every intention of using ro-ro vessels to move the vehicles.

Nikki Gilmore took the issue to the North American Automotive HazMat Action Committee (NAAHAC), where she spoke with other carmakers experiencing the same issue. She and Birdsall teamed up with the International Vessel Operators dangerous Goods Association (IVODGA) and finally the cross-industry Council on Safe Transportation of Hazardous Articles (COSTHA), which represents a number of industries, including automotive, at the UN.

"The carriers didn’t have a good understanding of what the new regulations were saying. Simply put, it was confusing." - Nikki Gilmore, TMS

With Toyota working together with all of these organisations, COSTHA developed a guidance document that set out the rules for shipping fuel cell vehicles in clear, straightforward language, setting out the conditions for which hydrogen vehicles can be shipped with full tanks.

“If you are shipping on a roll on/roll off vessel, then your vehicle is not subject to anything within the regulation as long as the battery is turned off and the shut off valves are closed so that the vehicle won’t start itself,” says Birdsall.

Vehicles moving by container, by contrast, cannot be filled with any hydrogen since they cannot be easily accessed.

The document has been a success, as ro-ro carriers are now carrying hydrogen vehicles with full tanks, with the first fuelled vehicles arriving safely in mid-April at the port of Long Beach, where Toyota has its main terminal for imported vehicles on the west coast. They are due to go on sale in the autumn.

As well as allowing them to move as any normal vehicle would, the clarification is in some ways recognition of the safety of hydrogen-fuelled vehicles. According to Birdsall, the only difference between shipping hydrogen versus gasoline vehicles is the ability to contain the hydrogen in the tank and avoid leaks. The tanks in the Mirai, which are positioned below the rear seats, are built in-house by Toyota, follow UN global standards, and have been tested vigorously – including trials that have dropped the vehicles, as well as shooting at them to ensure there would be no leakage.

“There is no danger compared to other types of vehicles,” Birdsall says. 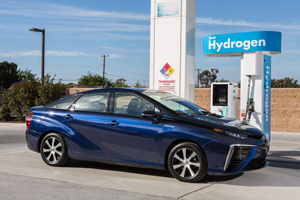 According to Gilmore, there are also no restrictions for inland transport once vehicles arrive in the US, allowing the vehicles to move on trucks with full tanks, for example. For aftermarket parts, there are also few issues, except for storing the hydrogen tanks. “We require special storage just as you would for any pressurised cylinder,” says Gilmore. “They require a special packaging from Japan, for example. Otherwise, it is similar to compressed gas, and we had to obtain a special permit from the Department of Transportation to move the tanks.”

As with other flammable liquids and many hazardous materials, the vehicles also cannot fly with full tanks. “You cannot ship any flammable air or gasoline by air,” says Gilmore. “That is not allowed even for regular gas or battery operated vehicles – they have to be completely disconnected.”

While flying vehicles is relatively rare, it is done for test models and prototypes, as well as during launches and motor shows. In the case of a hydrogen vehicle, the challenge comes after the arrival, where there may be no fuelling station in the vicinity. Currently there are only around ten hydrogen-fuelling stations in the US, all of them in California, where the Mirai will initially be sold.

“When you’re flying by air or arriving by container anywhere outside California, you’re posed with the challenge of having a vehicle you can’t operate because you can’t refill it,” says Birdsall. “If we fly to a motor show, for example, we need to bring a mobile fuel kit.”

"When you’re flying by air or arriving by container anywhere outside California, you’re posed with the challenge of having a vehicle you can’t operate because you can’t refill it. If we fly to a motor show, for example, we need to bring a mobile fuel kit" - Jackie Birdsall, TEMA

Obviously this issue highlights one of the main challenges for this technology. The Mirai has the longest range of any available electric vehicle at around 300 miles (500km), according to Toyota’s measurements, and it can be filled up in around five minutes. However, without the infrastructure, customers – and to some extent, logistics providers – are constrained by location.

California is set to continue its lead in hydrogen. The state has allocated $200m for hydrogen infrastructure, with plans to increase the number of stations to 20-25 by the end of this year, and a goal of 100 by 2020, says Jana Hartline.

“There has also been infrastructure movement in the north-east, which is the next place we will start distributing the Mirai and where we are also assisting with the infrastructure development,” she says. “The initial announcement is for development of 12 stations in north-eastern states beginning in 2016.” 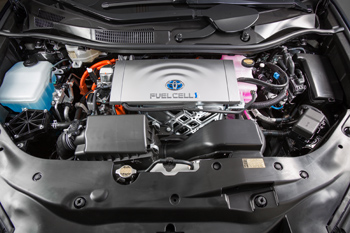 Hartline is optimistic on both the potential for and the take up of hydrogen fuel cell vehicles. One day, she points out, it could even have a big impact on the logistics industry, as the fuel cells can produce electricity for commercial vehicles as well as passenger cars.

“With electric vehicles, you are limited to range versus weight, so you have diminishing returns as you get bigger. However, the scalability of hydrogen fuel cells could make it very interesting for areas like automotive logistics,” she says. “There are already fuel cell buses on the road in Japan.”

Mirai is Japanese for ‘future’, and it is perhaps no surprise that its advocates highlight the possibilities still to come, looking at where the technology that has only just reached the shore in Long Beach could be in 30-40 years’ time. Given the fast pace of technological change, it seems likely that advances in such vehicles may continue to outpace both the infrastructure and regulatory environment around them. Thanks to clearer guidelines at sea, at least it’s a future that can sail here a bit more smoothly.