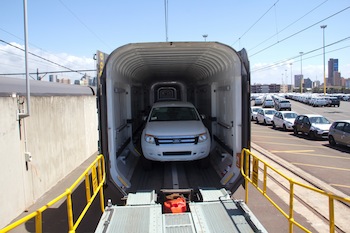 South African rail company Transnet has officially launched the use of its latest freight wagons for vehicle manufacturers. Around 230 of a total production number of 350 have been made by Transnet Engineering, at its facility in Uitenhage near Port Elizabeth. The last wagon is expected to be ready for use by the end of January.

The new wagons, which are higher and wider, are a significant improvement on the design and capabilities of the older models, according to Transnet, and can carry conventional vehicles, as well as SUVs and minibuses.

The use of internal lighting means the wagons can be loaded day or night, and Transnet Freight Rail is now implementing 24-hour shifts to meet the demands of its customers.

The additional wagons have also enabled the company to run longer trains in response to government initiatives designed to move more cargo off the country’s roads and onto rail. The average train length has now increased from around 25 wagons to 45. They are being used primarily on the route between Kaalfontein, Johannesburg, Port Elizabeth and Durban.

The investment is part of Transnet’s ZAR 307 billion ($30m) seven-year infrastructure improvement programme known as the Market Demand Strategy, which is designed to better serve customers through improved maintenance and expansion, as well as improve South Africa’s manufacturing strategy.