In the second part of our study into truck fleet procurement for vehicle logistics, manufacturers and equipment providers explain how they are striving to meet the large needs of a very small industry. 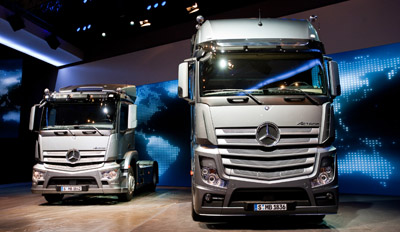 Talking to car hauliers about their fleet purchasing strategies reveals just how specialised their requirements are for vehicle logistics. The ‘shopping list’ of what these buyers want is long and detailed, ranging from the obvious concerns about price and fuel economy, to the truck’s height and weight requirements, as well as ‘value-added’ technologies that range from telematics to engine shutdowns for idling.

For example, truckmakers must accommodate the unique dimensions that car hauliers require in their production and supply processes, according to Ulrich Bastert, head of sales and marketing, Mercedes-Benz Trucks at Daimler.

“Customers in this segment require a custom-designed product, usually with a total cab height of under 2.60 metres to keep the total vehicle height including body under 4 metres,” he says. “Components therefore have to be arranged low down on the side of the frame, with special axles and wheel bases.”

Manufacturers of trucks must balance such specific needs with meeting regulations and maintaining their own economies of scale. Car hauliers not only tend to have thin margins, and are thus slow to invest in new equipment, but they are also a comparatively small sector. According to Dave Fleischman, sales manager of TEC Auto Transport Equipment Sales, which is part of a Volvo Mack dealership group in the western US, the total operational North American fleet of car-transporter rigs varies between 15,000 and 20,000 units, with average annual sales of 1,500 units. Compare this to a commercial vehicle industry where around 250,000 class eight trucks – those heavier than 15,000 kilos – will likely be sold this year in North America and where the aggregate operational fleet runs into the millions.

Meeting the needs of such a tiny market, while preserving one’s own profits, isn’t easy. Most manufacturers take the approach of selling standard products, which can then be customised and tailored to the industry’s specific needs. That is likely to require bodywork at other suppliers, as well as specific financing options. Considerations for maintenance and service parts could also be king in choosing brands.

Of course, one of the first considerations for both buyers and sellers of truck equipment is price. While this concern is nearly universal, some markets are more sensitive than others. According to Marcos Forgioni, vice-president of sales and marketing at MAN Latin America, average operators in Latin America are extremely concerned about price, as most face highly competitive markets with very low margins.

“In a lot of cases, this requires them to work from a set, or expected, fee downwards in order to improve their margins, as opposed to working from costs upwards, with just service provision as the possible differentiation,” says Forgioni. “So, there is no clear 'breakthrough' aspect that allows one operator to differentiate itself from another.” 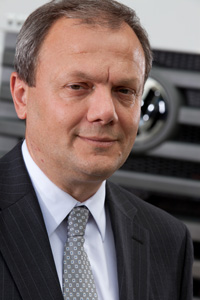 MAN's Marcos Forgioni says that Latin American truck buyers are very price sensitive
These operators, for example, would view adding technology such as telematics purely as an extra cost. Larger operators, meanwhile, would use telematics to reduce insurance premiums and as a tool to improve delivery timings and planning.

“In-cab technology is definitely not perceived as a point of differentiation between suppliers and so is not a key point when making purchasing decisions,” says Forgioni.

Although European providers are also under a lot of pressure, the average provider there appears to focus more on using the technology to improve operating costs. Bastert at Daimler believes the most important factors influencing car hauliers are total cost of ownership (TCO), along with product performance and product fit.

“Both telematics and fuel economy make a crucial contribution to TCO,” he says.

In the US, which is seeing growth in new fleet purchases among vehicle hauliers, increases in fuel, emission standards and operating costs in recent years have made their purchasing considerations about much more than product price.

“Not only have environmental standards continued to evolve, but we once again have a driver shortage,” says TEC’s Fleischman. “Auto-haul companies therefore need good quality equipment able to retain drivers, whilst also offering the best load factor, thereby generating the most revenue.”

“Customers spending that much money would be looking to keep that piece of equipment for at least ten years, so it can make sense to pay a bit more for a model that can generate even slightly better fuel economy, because it can often generate an ROI in literally a few months,” asserts Fleischman.

Despite the need to see beyond cost, Fleischman concedes that truck prices have risen because of new emissions standards, which have boosted truck prices by up to $30,000 since 2004 to cover the costs of engineering and equipment.

"Customers spending that much money would be looking to keep that piece of equipment for at least ten years, so it can make sense to pay a bit more for a model that can generate even slightly better fuel economy, because it can often generate an ROI in literally a few months." - Dave Fleischman, TEC

There have been other changes in the market that have changed the way that truck manufacturers sell their products. In the early 2000s, Volvo controlled around 70% of the auto-haulier market in the US, with International (a division of Paccar) taking the rest. At that time, both offered a dedicated day cab car carrier chassis. Later when Sterling (part of Daimler) entered the market, the other two withdrew the dedicated offerings, since there was simply not enough pie to split between three manufacturers. Today, most carriers use Volvos or Peterbilts (part of Paccar), with other Daimler brands Freightliner and Western Star also having a presence.

With this competition, most manufacturers tailor their standard products in pre-order configurations. Daimler, for example, serves the European market with its Actros range. But it also relies on bodyshops for customisation after trucks comes off the line.

Customising is about more than the truck’s size and weight, however. MAN’s Forgioni notes the importance of calculating the total cost of ownership for specific companies, since they might focus on different aspects, including a product’s initial price tag, along with that of parts, servicing and financing.

“Depending on the operational profile of each operator, a vast array of KPIs may be more suitable to one or another,” he says. “This is where the actual competition lies [for manufacturers]: in devising a client-oriented TCO programme that is maximised for each client's operational profile.”

Bastert says that comparing whole life costs between different manufacturers is difficult and that not every company makes those comparisons correctly. But he thinks it is an area in which Daimler has an advantage. It has experts that work with customers to advise them on issues from driver training to specific fuel comparison in particular markets.

Who will best look after you?

Aftersales support can also have a big impact on purchasing decisions. Daimler’s Bastert points out that a truck that is off the road is not earning money. Along with a truck’s reliability, a manufacturer’s parts supply, network density and service quality are critical, he says.

Fleischman believes that getting repair work done as fast as possible is more important than it has ever been. Modern trucks are so sophisticated that an operator's maintenance department can only do certain work on the chassis, after which it will need the help of a franchised dealer.
“If two or three manufacturers are quoting the same truck package – truck, head rack and trailer – at a similar price, the question then becomes which dealer will look after you best,” Fleischman says. “Crucially, they have to have facilities on routes where that operator's trucks run and be able to deal with problems around the clock. There are very significant differences between manufacturers in this respect.” 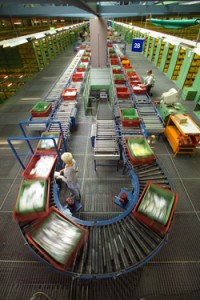 Spare parts at a Daimler facility

While vehicle logistics providers have different strategies for refreshing fleets, Fleischman believes that, because of the need to comply with ever-stringent emissions standards, it is less effective to refurbish or rebuild a vehicle than it once was, particularly if it has to operate in California, where environmental regulations are toughest.

Fleischman says that most vehicle logistics companies are now keeping trucks for 10-12 years, compared to the 20 years that had been common (although some major logistic companies, including Jack Cooper, still keep trucks longer by doing a mid-life refurbishment). Fleischman says some companies even turn in their trucks every 3-6 years to maximise resale value and thereby only operate trucks under warranty. “For them, resale value is key,” he says.

Nevertheless, Fleischman also says many customers retrofit equipment. TEC Equipment, for example, can retrofit a car carrier’s bodywork as well as technology, such as soft-tie conversions. Such retrofitting can extend the life of a transporter by several years for less than $10,000 in some cases.

As for the powertrain package, Fleischman says it makes sense to either rebuild the engine or do a complete unit refurbishment, which will extend operational capabilities for a further five years for as little as a third the cost of buying new.

“A lot of that depends on what is being hauled, the operational region and how the truck is operated,” Fleischman says. “However, a new truck will give you better fuel economy than you could get ten years ago and also near zero [particulate and noxious] emissions.”

Changes to financing have also shaped the buying habits of logistics providers. According to Fleischman, in the years leading up to the financial crisis, virtually anybody with a $10,000 down payment could buy a car carrier in North America. When the bottom fell out of the market, financing companies switched to wanting a 50%-70% down payment and a stellar credit history before they would part with cash.

Things are getting easier, at least in the US, with finance available for any customers that can justify a request, with both rates and down payments reasonable. However, Fleischman doesn't believe that a return of profligate lending to this sector would be in anybody's long-term interest. 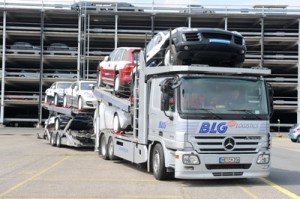 “It is not just the purchase price of a vehicle that plays the main role. Nowadays, the actual monthly costs of fuel consumption, maintenance, insurance types and vehicle utilisation are even more important,” says Bastert.