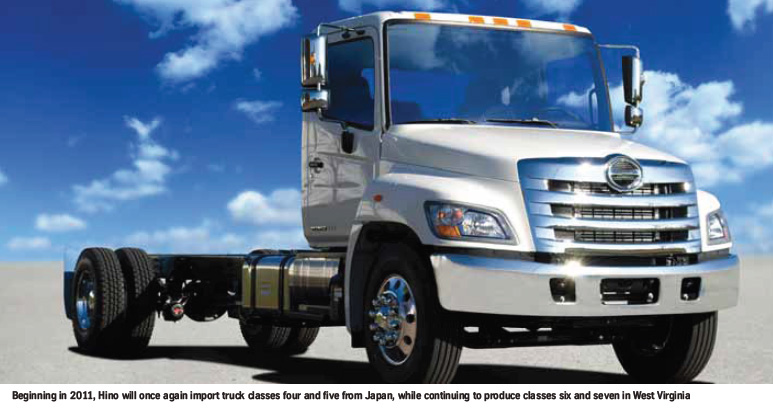 Hino Motors has had to adjust its distribution strategy in the face of the decline in commercial vehicle sales, but has seen clearly the benefit of working strategically together with its 3PL and truck carrier, reports Barry Cross.

After having imported vehicles since 1984, Hino Motors, the US division of the Japanese truckmaker and Toyota subsidiary, changed policy in 2004 and commenced domestic production at a Toyota facility in Long Beach, California. Then, 2½ years ago, production was shifted from the West Coast to Williamstown, West Virginia, on the other side of the country.

The East Coast truck plant has produced a range of vehicles from class four to seven, although the recent downturn has seen annual production drop from a high of around 7,000 trucks per year to just 3,000. Poor sales of the conventional truck in classes four and five have resulted in production of these being halted for the next year; instead, from the summer of 2011, a new global platform cab-over version (COE) produced by Hino Motors will again be imported from Japan, the US being the first overseas market to receive it. A hybrid COE version will follow in late 2011. However, class six and seven trucks will still be made at the West Virginia plant.

A close relationship with its 3PL and a carrier
In the continental US, Hino uses Vascor, a Toyota affiliate, to undertake third-party logistics. Bob Petz, Hino’s vice president of logistics operations, says that, despite the Toyota connection, Hino is free to deal with any open market provider it chooses, although he notes that Hino and Vascor’s partnership is somewhat unique, since there are not many specialised vendors to choose from. Competitors, he explains, primarily work with a few other specialised commercial vehicle transport carriers that have been in the market for many years.

“I don’t think that the commercial vehicle market believes that 3PLs are absolutely necessary because of the specialisedtransport required; they certainly haven’t been accepted or integrated as fast as in many other industries,” Petz remarks. The present Hino structure in the US resembles that adopted by Toyota in the country in that it allows the manufacturing company to sell vehicles to a dedicated sales company. Given this arrangement, stresses Petz, it is important to have expertise in vehicle inspection in place at the time of the hand over; Vascor excels in this area, he notes.

“While we use Vascor as our 3PL, we do have major input into how the overall logistics package is put together. Nowadays, we use one primary transport carrier, Unimark Truck Transport, which has replaced a previous set up involving several carriers. Our recent downturn in volumes meant that we were trying to share an ever-shrinking piece of pie. It therefore made sense to focus on a single carrier and give them the remaining economies of scale.” Interestingly, while Unimark does get the lion’s share of the haulage business, Hino will occasionally ask Vascor to go out to competitive tender on routes to see what rates the market is offering.

Petz notes that Vascor’s in-house systems have also helped add value to the overall contract. A variety of metrics, including tracking, performance and delivery times measurement, as well as monitoring dwell times, have helped to fine tune the overall logistics provision. “All of this helps us negotiate more favourable rates, spot where there are bottlenecks in the overall supply chain and calculate average lead times,” he says.

Meetings between 3PL and client take place quarterly, which is when Hino gives its forecast as to how the market is going, while Vascor provides feedback on potential bottlenecks that it foresees emerging over the coming months.

“Because [Vascor] act as the intermediary between the production facility and us, it often faces the brunt of some of the problems and calculates how to overcome them. Sometimes we take their observations back to the production facility and attempt to smooth things out,” says Petz. He cites an interesting example of where this close relationship has paid dividends. Previously, trucks coming off the production line would be checked into a Hino sales holding facility, where they might be identified as needing modifications prior to customer delivery. This used to then involve Vascor taking the truck back to the production facility from which it had only recently emerged for these modifications to take place. Nowadays, thanks to input by the 3PL, these modifications are done before the truck leaves the plant, notably reducing handling and overall cost. 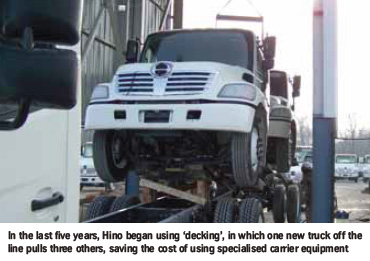 Asked whether the recent decline in volumes handled by Vascor had resulted in contract changes, Petz states that the existing agreement did not lock Hino into specific volumes. He nevertheless concedes that discussions did take place regarding rates. This resulted in the aforementioned single carrier structure being adopted.

“Over the last four years, we have been successful at reducing costs pretty significantly. In fact, we have been able to reduce somewhat our cost per mile throughout this downturn and have been able to squeeze out some of the remaining fat. However, we don’t continually go back to the carriers and demand discounts. It’s not our policy to beat up on a dead horse; our carriers are struggling enough as it is. Nevertheless, rates they are offering are extremely competitive at the moment,” says Petz.

The move to ‘decking’
In the past, Hino did use several distribution facilities. Today, where possible, vehicles are supplied strictly out of West Virginia, a reflection of the more modest quantities involved. However, trucks undergoing bodywork may be temporarily stored at specialist facilities, where upfitting occurs. In the past, a large Unimark facility in Missouri had also been used to store vehicles.

“I wish we had a use for those extra facilities at the moment, but the market simply isn’t big enough,” says Petz. In terms of the preferred delivery technique, in the last four to five years, Hino has transitioned from moving chassis by trailer to ‘decking’, involving one new truck hot off the line pulling three others. About 60% of outbound production is now moved like this. Petz explains that this is purely and simply a cost issue, since only fuel and a driver’s wages are involved. There is no need to pay for either a class eight truck or trailer, thus making tangible fixed asset savings and reducing fuel spend, since Hino’s own trucks are extremely fuel-efficient.

“Since we started 3½ years ago, we have had no major accidents associated with decking, while the percentage of damage is extremely small and tends to occur whenever somebody ‘undecks’ outside the standard process. There is a certain way to do it. We therefore insist that the transport carrier controls the pool of drivers that deliver our vehicles, which amounts to around about 15-20 guys that know what they are doing in this regard. Extensive training taking several days is provided for all new drivers,” Petz explains.

He candidly concedes that the company’s track-and-trace capability is average, although notes that the relatively lowtech approach is very much market driven, since just-in-time procedures are not common in the commercial vehicle sector. Drivers operating deck-sets, for example, don’t have GPS installed. Instead, regular call-ins are as sophisticated as it gets in some cases. However, enhanced systems are in the pipeline and will be introduced over the next few years.

“This is an area representing one of the challenges faced by our 3PL at the moment. Currently, dealers are limited as to the information that they can access through our dealer portal. They know when a truck has been built, when it has been released to a carrier, when it leaves a facility and an estimated delivery date,” says Petz.

He adds that, working pro-actively alongside Vascor, delivery times have improved from an average of 6-8 days to around four days. About 45% of vehicle deliveries take place west of a line linking Illinois to Texas, and 55% to the east.

Importing once again from Japan
Turning to the planned import of trucks from Japan, Petz concedes that, since Hino made its initial calculations, oceanshipping rates have dropped considerably and are certainly more competitive than when the company was importing five years ago. The plan is to use ro-ro vessels to bring outbound shipments to the US, since this is standard procedure throughout Toyota and results in less damage compared to lift-on, lift-off operations for containers.

Hino will once again make use of either San Diego or Long Beach, since the majority of its West Coast customers can be more easily supplied from there. Oakland, the northern alternative, would be unsuitable, since few Hino customers are located in the US northwest. Ports in Maryland and Delaware will be used for eastern US demand.

“Because these are class four and five trucks, we will not be able to use decking; the engine horse power simply isn’t there. We will therefore dispatch consignments of four to five units on chassis trailers. However, we anticipate securing very competitive rates, since shipping off the West Coast into the US is characterised by the large amount of spare capacity available, as many drivers are looking for a return load back east,” says Petz.