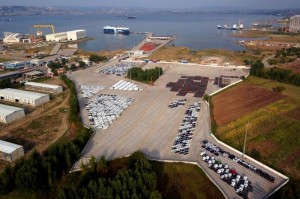 Turkey’s Autoport terminal, which is located at Yeniköy in the northeast Kocaeli region, has recommenced operations following an 18-month suspension of services at the port.

Autoport was the first purpose-built car handling terminal in Turkey when it opened in 2008 but it was forced to suspend operations in September 2013 following a decision by local authorities to suspend the operating licence of the terminal for an undefined period.

The legal conditions preventing operations have now been lifted and a new licence issued, with an agreement reached on land usage up until February 2058.

“We are glad to announce that the legal conditions preventing operations at certain parts of Autoport have now been nullified and the initial Land Usage Rights agreement between Autoport and the Department of National Property has been revalidated,” said a spokesperson for the port.

The terminal, which is owned by Arkas Group, restarted operations last Friday (March 27th) following the reissue of Autoport’s Coastal Facility Operations Permit by the Ministry of Transport, Maritime Affairs and Communications.

The Kocaeli region is home to 80% of the country’s automotive production and Autoport is capable of handling 400,000 vehicles per year, with storage space for 6,000 passenger cars.

Autoport did not get to realise that full capacity but its closure was a disappointment for a number of carmakers, not least Daimler, which had consolidated its short-sea shipping at the port for Mercedes-Benz cars and vans in early 2013.

Jan Maes, manager of vehicle distribution for passenger cars and commercial vehicles in Europe, told Automotive Logistics in an interview last year that Autoport had been the only dedicated terminal with sufficient storage space available and the potential to install adequate PDI activities. Previously, the carmaker had shipped its vehicles by short-sea and by barge and truck combination. Since operations ended at Autoport, Daimler has shifted its imports to the port of Derince.

Toyota also had an interest in the Autoport terminal having completed a trial project for vehicle throughput that involved 1,500 imported vehicles and 475 exports.

It remains to be seen whether these carmakers will now return to Autoport.