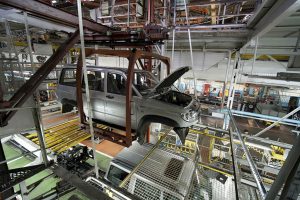 Russian carmaker UAZ has announced plans to target new markets to increase vehicle exports this year following a sharp drop in exports to established markets last year. The company said it would aim at a 40% increase on last year’s figures to markets in South America, the Middle East, Southeast Asia and Africa.

UAZ exported 6,461 cars last year, which was 38% less than in 2013. Representatives of the company said the main reasons for the sudden drop was twofold: contrast with the rapid rise in exports seen in 2013 and the loss of the Ukraine market, traditionally one of the most important export markets for Russian carmakers.

“In our view, the decline in sales [of exports] last year was connected with the general economic situation, as well as the loss of the market of Ukraine,” said the company in a statement. “In 2015 our goal is to return to the volume of export sales to the level of 2013. And we have a clear plan: UAZ will study new markets of foreign countries including South America, Middle East, Southeast Asia and Africa.”

In addition to the surrounding CIS countries, including Kazakhstan, Ukraine, Armenia and Belarus, UAZ supplies of cars to China, Iran, Iraq, Indonesia, Hungary, Syria, Cuba, Egypt, Mongolia and a number of other markets.

The company’s management also stated that in general they are satisfied with the operational results of 2014 because, despite the sharp drop in export supplies, UAZ’s overall sales only decreased by 3% year-on-year, while the total fall of the Russian market last year amounted to 10.3%.

Common strategy
There is now an emerging trend amongst Russian vehicle makers to increase exports as a means of offsetting sales damage on the home market. AvtoVaz announced its intention to double export of cars to 100,000 cars with the large-scale supplies to Scandinavia, while Kia’s Russian division is launchings export from its factory in St Petersburg to Eastern Europe and Kazakhstan.

Experts say that exports from Russia look promising for most carmakers because, thanks to the fall of the exchange rate against the euro and most Asian currencies, the profitability of such supplies last year jumped despite the increase in logistic spends. There are rumours that Toyota, Renault and GM could also soon start exporting vehicles from their Russian assembly plants.

Russian vehicle maker Kamaz has already succeeded in this direction, boosting exports volumes in the fourth quarter to 2,327 units, twice as many as it moved in the same quarter in 2013. Kamaz stated it had also suffered problems because of a fall in supplies to the Ukraine market. However, it was fully compensated with the rapid increase of supplies to Africa.

Kamaz expects to further boost exports sales in foreign markets in 2015 based on the current market conditions.

The Russian car market could drop by between 25-35% by the end of 2015, according to market analyst PricewaterhouseCoopers.