Ukraine freezes import of cars due to falling demand 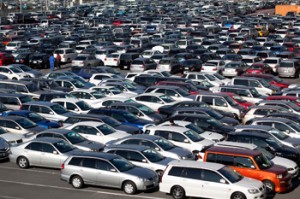 The fall of the car market in Ukraine, as well as the drop off in the exchange rate of its currency – the hrivnya, has forced most vehicle importers to halt deliveries of cars to the country.

As reported by the country’s state statistics service, in the first half of the year car sales in Ukraine only reached 64,609 units, which is 47% less year-on-year. Ukraine reduced the import of cars in the first quarter of 2014, compared to the same period of 2013, by 56% to 20,630. Analysts have since reported that sales have fallen every month, creating a build up of vehicle inventory at the distribution warehouses.

“One reason for the drop in sales and imports was depreciation of the national currency,” said Oleg Nazarenko, general director of the Ukrainian Association of Automotive Importers and Dealers. “The situation is that the cost of imported cars is directly proportional to the rate of the dollar or the euro. At the moment imports are frozen. There is, of course, still some demand on cars, but it is not as high as it was in the past, or the year before. We see sales falling.”

He added that a large number of foreign plants in Ukraine now export cars from the country.

"We understand that the Ukrainians do not buy cars for a million [hrivnias] because they have no money,” said Nazarenko. “So these cars will be taken out of the territory of Ukraine, and we have already seen such practice, because the plant will not sell the car at a loss; it is better for them to sell in the BRIC countries, or in the USA and so on."

Continuing decline in the car market in Ukraine has also led to a drop in production. Citing figures from the Association Ukraine Automotive Industry, Viktor Medvedchuk, leader of the Public Movement for Ukrainian Choice, said that total production of vehicles in July dropped by more than twice the figure for the previous month, and more than nine times compared with the same month last year.

However, experts have pointed out that imports are likely to be restored soon. Sergey Borovik, director of marketing for the AIS group of companies, said manufacturing at Krasz, one of the largest carmakers in the country, stopped in August, as well as contract assembly of Geely and SsangYong models at its plants. These cars will now be imported to Ukraine. The same thing could happen at other CKD manufacturing locations, which will ultimately support import supplies in the second half of the year.

"The truth is that due to the decline in sales and complete closure of the Russian market, all domestic automakers now are on the verge of bankruptcy, and most likely in the next few months it will completely stop production,” said a representative of the Ukrainian Association of Automotive Industry, who wished to remain anonymous. “The state will not support them, because the heads of the government just do not see any sense in such moves.”

As a result, by the end of the year, when the fighting in the East of the country comes to an end, the market will start to revive and imports could return to their former level, especially given the fact that there will be no competition from domestic producers,” he added.